As I've observed many times, one's fame isn't merely a function of popularity in the moment, or even during a lifetime, but also the degree to which one's art becomes ubiquitous enough to be included as a relevant part of important events years — even decades — after passing on.

Thus, I was delighted by the significant role Guaraldi played during last weekend's public unveiling of the Green Music Center's new Schroeder Hall, all part of Sonoma State University in Rohnert Park, California. The intimate, 250-seat venue was named after Charlie Brown's Beethoven-loving friend, Schroeder, at the suggestion of Charles M. Schulz's widow, philanthropist Jeannie Schulz. Aside from that nod to the resolutely focused Peanuts character who never lets lovestruck Lucy Van Pelt distract him from pounding out complicated symphonies on a toy keyboard — with painted black keys! — the designation also acknowledges Charles "Sparky" Schulz's lifelong fondness for classical music.

Additionally, the name brings renewed focus to a longstanding debate among Peanuts fans: Is Schroeder the young lad's first name ... or his last?

"People ask if there's a Mr. Schroeder," laughed Laurence Furukawa-Schlereth, co-executive director of the Green Music Center, when he was interviewed in the Santa Rosa Press Democrat. 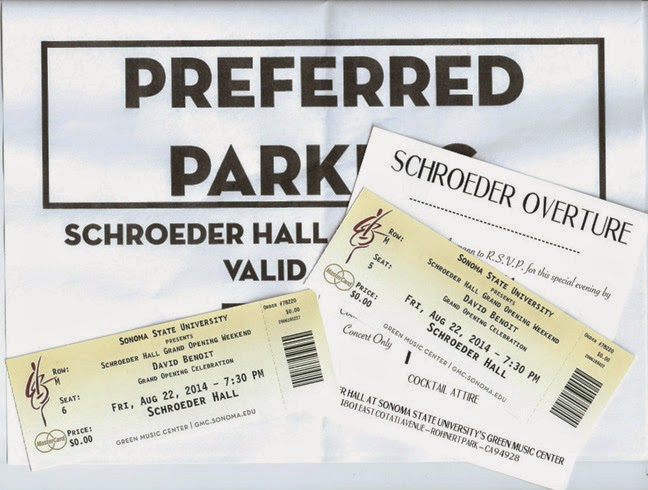 Schroeder Hall's debut weekend was marked by close to a dozen concerts and special events, the first of which — dubbed the "Schroeder Overture" — took place Friday evening, August 22. The cheerful, invitation-only crowd was an engaging blend of donors, Sonoma State University and Green Music Center personnel, staff members from both the Charles M. Schulz Museum and neighboring Creative Associates, and honored guests.

I had to wear a coat and tie, which conflicted with my long-established "Northern California casual" rep. Folks who know me would have fainted at the sight.

But it was a Snoopy tie, so maybe it would have been only a brief swoon.

Read more »
Posted by Derrick Bang at 4:13 PM No comments:

My efforts to track Guaraldi's concert and studio schedule have revealed that he performed at my college alma mater, the University of California/Davis, at least three times.

It's possible there were more than three. Cal Tjader's Quintet toured California in 1957 and '58, while Guaraldi was a member; the combo's many stops easily could have included UC Davis. A California college tour with Bola Sete in October 1965 also might have featured a stop at UC Davis. For that matter, Guaraldi easily could have managed one-offs, since Davis is only a 90-minute drive from his Bay Area haunts.

But I'm certain of only three appearances: November 3, 1963; September 26, 1968; and October 7, 1972. The latter is particularly frustrating, as I entered UC Davis as a freshman in the autumn of 1973, thereby missing him by just one year. He never returned to Davis during my undergraduate years, more's the pity.


Thanks to the archives of the UC Davis campus newspaper, The California Aggie, we get a fascinating portrait of the jazz genre's slide into "unhipness" during the course of this decade from 1963 to 1972, along with a general sense of the rise of the anti-establishment attitude of the paper's student journalists.

The 1963 appearance was made while Guaraldi's Trio — Fred Marshall, bass; and Jerry Granelli, drums — shared the bill with headliner Dick Gregory and folksinger Margie McCoy. This ill-fated cross-country college tour was cut short on November 21, when President Kennedy's assassination brought the entire country to a halt. The tour's appearance three weeks earlier, however, was just another stop along the way; The Aggie duly sent an unbylined reporter to cover the show. He (I'll assume it was a guy, given the era) did a noteworthy job, treating the event quite respectfully, allowing for early 1960s attitudes that make us wince today. Thus, Gregory is identified as a "Negro comedian," while McCoy is dubbed a "talented blonde."

But I hope it was a typo, rather than bad ears, that prompted the writer to identify the Guaraldi trio's final number as Fats Waller's "Litter Bug Waltz."

Guaraldi and his trio only rated a single long paragraph, though; the bulk of the review went to Gregory's set, which followed an intermission. The writer cited several of Gregory's more amusing lines, such as the fact that he liked football because "it's the only time a colored man could chase a white man and have 40,000 people stand up and cheer" ... or how his favorite Halloween ritual involved visiting an all-white neighborhood, knocking on a door and asking if the adjacent house really was for sale. These obvious laugh lines aside, the writer also made a point of discussing Gregory's stronger political content.

All in all, a thoughtful and well written piece. ("Litter Bug Waltz" aside.)

Vince on the Web

Guaraldi fans are lucky; most of the albums under his own name have remained in print and been readily available since their initial release. That's true of his entire Fantasy catalog, not so much his latter projects for Warner Bros. Oh, Good Grief was (and is) the most popular and easily obtainable of that trio; The Eclectic Vince Guaraldi and Alma-Ville require more digging, but even they're not too hard to find on either LP or CD.

But what about material that never saw commercial release?

Happily, a few nuggets exist, several of which are available via the Web. Some are housed in authorized online archives that are willing to share them with the general public; others are bootlegs that (shall we say) lack that level of legitimacy, but nonetheless are waiting to be enjoyed by folks who haven't yet discovered them.

Our first stop is SugarMegs Audio, "where live music lives since 1996." The site hosts a massive archive of more than 67,000 concert recordings, in whole or in part. Most are rock/pop, but you'll find other things as well. On the homepage, scroll down to where THE MAIN COLLECTION is headlined, then click on the "database interface" link below. That'll bring up a page with a small white SEARCH box on the left. Enter the name "Guaraldi," and — as these words are typed — you'll get six hits. (They're at the bottom of the page, so be sure to scroll down far enough.) Three are simply more recent performers covering one or more Guaraldi songs, but the other three entries actually feature Vince. In chronological order, they are: 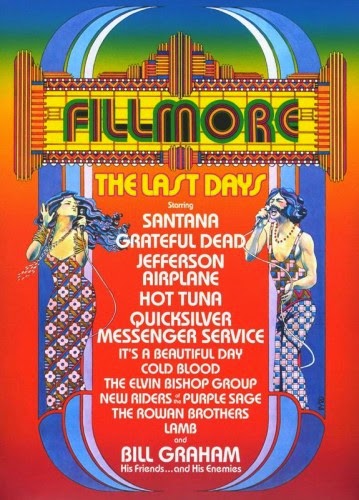 • The massive jam during the final night of the five-day farewell party for San Francisco's Fillmore West, which ran June 30-July 4, 1971. Guaraldi was part of the final evening's "San Francisco Musicians Jam," which included Van Morrison, the Tower of Power horn section, Quicksilver Messenger Service, Cold Blood, Hot Tuna, the Loading Zone and even rock impresario Bill Graham, on cowbell. Guaraldi played electric organ. You'll be hard-pressed to hear him over the chaos, but you're welcome to try!

• A shared billing with no less than Carlos Santana, during a benefit for the College of Marin in Kentfield, California, on the afternoon of October 7, 1972. The band also included Coke and Pete Escovedo; other personnel, if present, remain unnamed. Although numerous sources agree that the entire show was broadcast by a local radio station — some claim KPFA, others KSAN — only two fragments seem to have survived: a portion of a jam running just shy of 7 minutes, and a second, longer fragment from an extended jam version of "Evil Ways," that clocks in at about 15:38. You'll find them both here, stitched together as a single file. Guaraldi's electric keyboard can be heard quite clearly throughout both fragments, although the melodic quality of his contribution is open to debate. Mostly, he delivers the extemporaneous riffs that characterized his occasional rock-inflected appearances at the Matrix, during this part of his career. This file's nice bonus, however, is the DJ who speaks over the music at roughly 20:40, to identify Santana on guitar, and Guaraldi on electric piano.


• Unfortunately, the third item — Guaraldi's presence as part of Van Morrison's back-up band, for a concert at the Lion's Share, in San Anselmo, California, on February 15, 1973 — appears to have been removed from SugarMegs. Alternate sources, at The Midnight Café and Guitars 101, also no longer have active links; more's the pity. At this point, the only options appear to be much dodgier BitTorrent sites, so proceed with caution.

Morrison played two sets, and Guaraldi joined the band for the entire second set. To quote my book:

Perhaps inspired by Guaraldi's presence, Morrison devoted much of the second set to covers of standards that included "Misty" and "White Cliffs of Dover." The fit was awkward; Morrison did much better on his own hits, such as "Listen to the Lion" and "Hard Nose the Highway."

Even so, Guaraldi was allowed generous solos; he riffed on electric keyboard midway through "White Cliffs of Dover" and comped quite enthusiastically behind an oddly up-tempo handling of "Misty."

You can judge for yourself. Guaraldi spent about half a year with Morrison, from late 1972 through the spring of 1973, but this is the only known recording of their work together.