Way back in the day — seven years before A Charlie Brown Christmas debuted — Henry Mancini’s groundbreaking jazz soundtrack album for the TV series Peter Gunn was quite the rage. It spent well over a year on Billboard’s Top LPs chart, won two Grammy Awards — Album of the Year, and Best Arrangement — and prompted Mancini to release a sequel, More Music from Peter Gunn, later that same year. Both LPs were so popular that they spawned a unique cottage industry, when other jazz stars — most notably Shelly Manne, Ted Nash, Joe Wilder, Ray Ellis and Pete Candoli — covered the entire album.

Flash forward half a century, and Guaraldi’s equally iconic 1965 soundtrack for A Charlie Brown Christmas has garnered the same attention. It actually started with Cyrus Chestnut’s 2000 album of the same title, and more recently has included releases by the Eric Byrd Trio (2009) and The Ornaments (2011). Jazz pianists David Benoit and Jim Martinez also have covered the entire album over time, although not all at once, each taking several releases to do so.

Additional examples can be found in this earlier blog post.

To this group we now can add jazz pianist Jose “Juicy” Gonzales, who has presented Charlie Brown Christmas concerts for several years now, in his home town of Seattle, Washington. 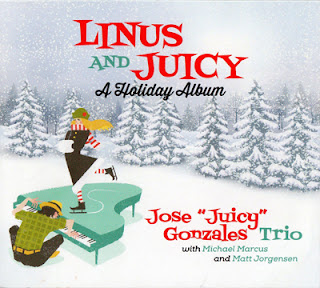 Linus and Juicy: A Holiday Album covers almost all of Guaraldi’s score — “What Child Is This”/“Greensleeves” was left behind — along with some apt extras. The versatile Gonzales is ably supported by bassist Michael Marcus and drummer Matt Jorgensen, both of whom get plenty of chances to demonstrate their own chops. The album opens with a ferocious double-time reading of “White Christmas” that positively roars, and offers lively keyboard and bass solos: just a taste of further delights to come.

Given how many hundreds (thousands?) of soloists, combos and bands have covered “Linus and Lucy,” this album’s highlight may well be “Linus and Juicy,” Gonzales’ playful and marvelously unique arrangement of that tune: a wild re-interpretation also highlighted by another of Marcus’ sleek bass solos. The trio’s handling of “Skating” is buoyant and lyrical; “Christmas Is Coming” is aggressively peppy, with a terrific swing bridge dominated by Marcus’ walking bass.

Jorgensen sets an infectious march tempo for “Little Drummer Boy,” adding tasty percussion touches behind Gonzales’ lyrical keyboard noodling; “Hark! The Herald Angels Sing” is suitably thoughtful and majestic. Gonzales opens “O Tannenbaum” with gentle solo piano, in a respectful echo of Guaraldi’s arrangement, and then “expands” the tune with some delectable swing that invites a tasty bass solo, which segues to lively byplay between keyboard and drums.

A lengthy, 7-minute arrangement of “Christmas Time Is Here” is properly gentle, offering plenty of lyrical improv by both Gonzales and Marcus. Unexpectedly droll and up-tempo readings of “O Come, O Come Emmanuel” and “Silent Night” deliver more sizzle than we generally expect from these two reverential carols.

Gonzales adds enthusiastic but clearly untrained vocals to “The First Noel” and “The Christmas Song,” which may raise eyebrows; although his delivery is heartfelt, Tony Bennett and Harry Connick Jr. have nothing to worry about. But that’s a minor quibble, given the finger-snapping “juice” that characterizes the rest of the album. It’s a must for Guaraldi fans, and can be ordered here.

December always unleashes a string of tributes to Guaraldi and A Charlie Brown Christmas, most of which are amateur noodlings from individuals who do little or no research, and add nothing of merit to the discussion. But this year is far better than usual, starting with Ethan Iverson’s scholarly piece in no less than The New Yorker.

Other items of interest: