The Trident: Then and now

Technology marches on, and I’m delighted by the increasing number of newspapers that have migrated their archives into public Internet search engines … often at no cost. (Having said that, I still await this service from the San Francisco Chronicle, merely the most important newspaper in Guaraldi’s career. I cannot imagine what the heck is taking them so long!) 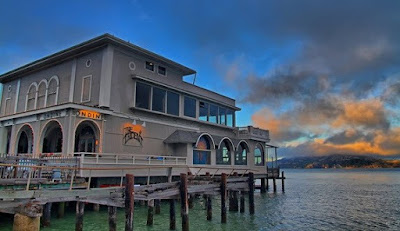 Recent online newcomers include the Sausalito News, a weekly newspaper based (as you’d expect) in Sausalito, California, and published from 1885 to 1966; for a few years prior to its demise, it was re-branded the Marin News, but returned to its former self shortly before the final issue was published on November 2, 1966.

The newspaper still was vibrant in 1961, when the former Yacht Dock — a dilapidated venue that had hosted Guaraldi’s trio on occasion, built on the site of the original 1898 home of the San Francisco Yacht Club — was transformed into the Trident, which became Guaraldi’s “home base” for the next several years. The paper provided more detail on this transition, which I’ve woven into the following narrative, augmented by some interview quotes that didn’t make it into my book. (The News also provided the conclusive specific date of the Trident’s closure: a piece of information that eluded me for years.)

The July 22, 1961, issue of the Sausalito News reported that “the clatter of hammers, the shouts of workmen and the rustle of blueprints prevail over the venerable wharf at 558 Bridgeway on the Sausalito waterfront.” The Trident-in-process, according to new manager Louis Ganopolar, would be dedicated to “casual imbibing in an atmosphere of elegance.” Ganopolar had been “poached” from his former position as manager at Greenwich Village’s famed jazz nightclub, the Village Vanguard. The then-popular Kingston Trio were booked there for a weeklong engagement; they arrived in the company of manager Frank Werber. The latter mentioned that the clean-cut young men had purchased the Yacht Dock as a tax write-off, intending to transform it into “something special.” Werber invited Ganopolar to Sausalito, to check out the place and (hopefully) suggest somebody who’d make a good manager. Ganopolar volunteered himself, and moved his family from New York to Northern California, the week this Sausalito News story saw print.

Brad McNutt, one of the remodelers, hoped for an “early August” re-opening. He explained that the new venue’s seating alcoves would be “dramatically lighted and arranged on several levels, to take advantage of the superb view of the Bay, the bridges and the city, while retaining an atmosphere of intimacy.” The article concluded by citing other features: “complete yacht docking facilities, music by the Vince Guaraldi Trio, and a select bill of fare of international hors d’oeuvres, sandwiches and snacks.” 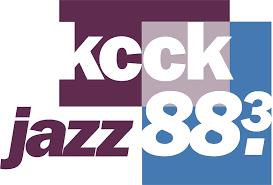 Guaraldi would have turned 92 today, and I'd like to think — in some alternate universe — that Dr. Funk is celebrating this milestone in the best possible way: with a club gig playing to a sell-out, standing-room-only crowd (masked and social-distanced, of course).

Meanwhile, and in anticipation of this birthday, I recently spent a delightful half-hour chatting with Dennis Green, of KCCK Jazz 88.3 in Cedar Rapids, Iowa. The resulting "Guaraldi special" airs today, and you can listen to it here.

(What's that, you say? Not yet familiar with what took over the past four years of my life? Well, hie thee hence to the books' companion blog!)

(And, rest assured, I found a couple of reasons to mention Guaraldi in those books, as well!)

Happy birthday, Vince. I genuinely believe you get more popular every year!
Posted by Derrick Bang at 10:34 AM 1 comment:

A summer with Vince 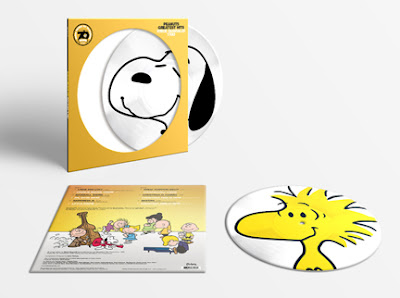 I'm particularly pleased, as I provided fresh liner notes for both albums. It'll be fun to see my name in a larger font size!

I'll turn the rest of this post over to Craft's press announcement:

The first is a limited-edition picture disc of Peanuts Greatest Hits, featuring the faces of Snoopy and Woodstock; it will be available on July 24. The second release, coming August 21, is the first-ever vinyl pressing of Peanuts Portraits. Both titles, which are available for pre-order, feature the enduring music of the Vince Guaraldi Trio. Peanuts Portraits, in addition, includes several recordings from Guaraldi and pianist George Winston which have never been available on vinyl. 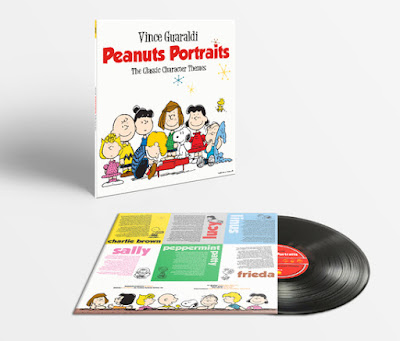 Limited to 2,500 individually numbered units, the collectible Peanuts Greatest Hits picture disc offers music for all seasons from the animated TV specials, including the instantly recognizable “Linus And Lucy,” the classic “Great Pumpkin Waltz” and yuletide favorite, “Christmas Time Is Here.” Side A features a cheerful-looking Snoopy, while his avian sidekick, Woodstock -- who made his first official appearance in the Peanuts comic strip 50 years ago this June -- graces Side B. The collection also includes some of Guaraldi’s earliest Peanuts compositions, such as “Baseball Theme,” which originally appeared on his 1964 LP Jazz Impressions of a Boy Named Charlie Brown: the soundtrack for an unreleased TV special about the comic strip’s anti-hero. Another highlight is “Little Birdie,” written for the 1973 special A Charlie Brown Thanksgiving, and featuring a rare vocal by Guaraldi.

On vinyl for the very first time is Peanuts Portraits, which collects the vivid musical cues that Guaraldi wrote for the cast of Peanuts characters. With his evocative compositions, the artist added new dimensions to beloved regulars such as Peppermint Patty, Schroeder, Sally and (of course!) Charlie Brown. In addition to nine songs performed by Guaraldi, the album includes two classic Peanuts tunes recorded in the 1990s by pianist George Winston. Eight of the selections on Peanuts Portraits -- including Winston’s renditions of “Linus And Lucy” and “Masked Marvel,” along with Guaraldi’s alternate takes of tracks such as “Frieda (With the Naturally Curly Hair)” and “Charlie’s Blues” -— will make their vinyl debut.

While Peanuts Portraits will be released across all major music retailers on black vinyl, fans also can find an exclusive edition of the album via Vinyl Me, Please. Limited to 1,000 copies, the LP will be pressed on 180-gram red vinyl.

(This actually is the second picture vinyl edition of Peanuts Greatest Hits; the first, featuring the images of Charlie Brown and Lucy, debuted in September 2015.)

Drummer Jerry Granelli joined the Guaraldi Trio on February 21, 1963, for a three-night gig at the Berry Patch, in Sacramento, California. He and bassist Fred Marshall became Guaraldi's third "classic trio," working together during the post-"Cast Your Fate to the Wind" rush that turned Dr. Funk into a Northern California jazz star. The trio blossomed into a quartet with the arrival of Bola Sete, and they became a multi-month mainstay at Trois Couleur in the spring of 1964.

Granelli and Marshall went their separate ways after that gig finally concluded on May 31, although the former reunited with Guaraldi briefly for a few tracks on The Eclectic Vince Guaraldi, and some cues for the big-screen film A Boy Named Charlie Brown.

Granelli then spent the bulk of his career alongside jazz/blues pianist, singer and composer Mose Allison. 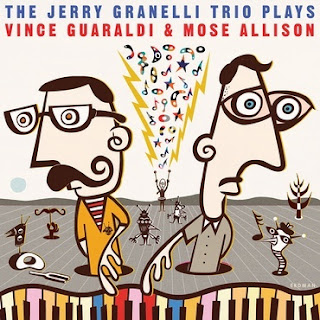 More recently, Granelli has been fronting Charlie Brown Christmas tribute concerts each December at a handful of Canadian venues, mostly close to his Nova Scotia home. No surprise, then, that he finally decided to honor both of the icons with whom he spent so many happy years, with a tribute album titled The Jerry Granelli Trio Plays Vince Guaraldi & Mose Allison.

Guaraldi is recognized with three tracks, to Allison's seven (which is appropriate, considering that Granelli was at the latter's side for much, much longer). Granelli is joined by pianist Jamie Saft and bassist Bradley Christopher Jones.

The album opens with an oddly ethereal handling of "Cast Your Fate to the Wind," the initial 60 seconds of which sound like all three musicians are still warming up. But they eventually settle into a lovely reading of Guaraldi's Grammy Award-winning hit, which is highlighted by Saft's sensitive keyboard work.

Their work on "Christmas Time Is Here" is even sweeter, with Granelli tastefully understated while both Saft and Jones contribute lyrical solos. The Guaraldi highlight, though, is an extended run at "Star Song," which Granelli should know quite well (having recorded it, alongside Vince, on three different albums). Granelli sets up a tasty, bossa nova-flavored atmosphere, while Saft and Jones trade the melody back and forth, comping the other during each hand-off.

Granelli's trio maintains a gentle touch on all three of these Guaraldi tunes; the same cannot be said for their Allison covers, which are far more outré. Guaraldi fans therefore are advised to tread carefully; give the album a listen on Spotify first, before jumping to purchase.

(And, just in passing, this has got to be one of the most unattractive album covers I've ever seen!)
Posted by Derrick Bang at 9:25 AM No comments: