Something to devour from Omnivore

Check out this cool trailer. 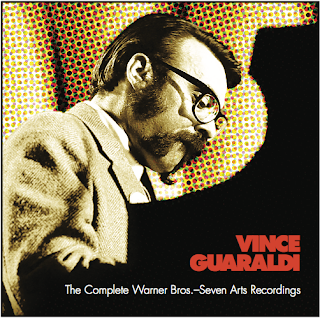 Got your attention with the phrase “bonus tracks,” right?

It's true. The double-CD package includes never-heard-before covers of Bacharach/David’s “Do You Know the Way to San Jose” and the gospel hit “Oh, Happy Day,” along with a Guaraldi original titled “The Share Cropper’s Daughter” and an alternate take of “The Beat Goes On.”

Many people got to know Guaraldi through his 1963 Grammy Award-winning song, “Cast Your Fate to the Wind,” or via Sounds Orchestral’s Top 10 cover of it two years later. Lee Mendelson heard Guaraldi’s version while working on a Peanuts documentary; he contacted the pianist and asked him to score that project. Although Mendelson wasn’t able to sell that documentary to network television, he and Guaraldi subsequently reunited for what became the first Peanuts television special, A Charlie Brown Christmas. It was a match made in TV and musical history. With songs like “Linus and Lucy,” the show was a hit, and for more than five decades, not a holiday season went by without an airing. So potent and successful was the Peanuts/Guaraldi combination that the jazz pianist went on to score a total of 15 Peanuts television specials, a 1969 documentary and the debut feature film that same year.

In 1968, Vince made a label switch from his long-time home, Fantasy Records, to Warner Bros. Records. For his inaugural album, Oh, Good Grief!, he decided to re-interpret his Peanuts classics. In addition to the instantly recognizable Guaraldi sound of piano, bass and drums, he added electric guitar and electric harpsichord to the mix. The record was a smash hit.

For its 50th anniversary, Oh, Good Grief! will be presented by Omnivore Recordings the way the world first heard it: as stated on the original release’s back cover, “on shiny black vinyl.” (Well, actually, this special edition is “on shiny red vinyl.”) Mastered by Kevin Gray and pressed at world-class record-pressing plant RTI, this timeless album never has sounded better.

Following Oh, Good Grief!,1969’s The Eclectic Vince Guaraldi lived up to its title and found the pianist experimenting: There’s a large string section, Guaraldi’s first recorded vocals (covering the singer/songwriter Tim Hardin), and original compositions that could be described as lengthy rock jams.

Guaraldi’s last album for the label and final-ever album, 1970’s Alma-Ville, ranks among his best-ever releases. Six of the nine songs on this “return to jazz” project were Guaraldi originals; the set was recorded with several different ensembles. Besides the original compositions, Alma-Ville finds Guaraldi covering the Beatles’ “Eleanor Rigby,” which had become a staple of his live performances; Duke Pearson’s “Cristo Redentor”; and the Michel Legrand/Norman Gimbel song “Watch What Happens.”

Guaraldi’s three albums for Warner Bros.-Seven Arts have been produced for this reissue by Grammy Award-winning Omnivore, Cheryl Pawelski; and remastered by Grammy Award-winning engineer, Michael Graves (who, under his Osiris Studios banner, also handled remastering for earlier Guaraldi digital releases such as Vince Guaraldi with the San Francisco Boys Chorus and Oaxaca). The new liner notes are written by your humble biographer/blogger.

Orders can be made directly from Omnivore.

Music remains fresh and vibrant as long as it continues to be presented for public appreciation. 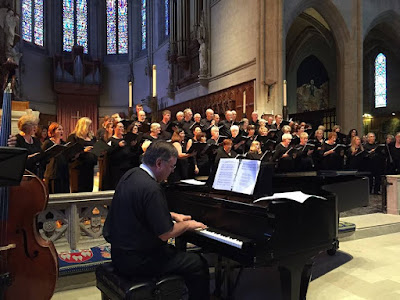 The service will be hosted by Bill Carter and the Presbybop Quartet. The musicians will include Carter (piano), Mike Carbone (flute), Joe Michaels (bass) and Tyler Dempsey (drums), along with the St. Stephen's choir, under the direction of Mark Laubach.

Regular readers of this blog will recall that Carter was involved with both of the 50th anniversary presentations of Guaraldi's Mass, which took place during the late summer of 2015. Plenty of further details about those events can be found here and here.

Pennsylvania residents -- and anybody close enough to participate —- are encouraged to join Carter and Presbybop, as they present  Guaraldi's Jazz Mass in this extraordinary setting. Written six months before his soundtrack for A Charlie Brown Christmas, the Mass is a highly melodic composition, and the first jazz mass ever performed as part of an American church service.

It debuted May 21, 1965, at San Francisco's Grace Cathedral. The music was recorded, but never written down. To mark the Mass' aforementioned 50th anniversary, Carter transcribed the music from original and unreleased recordings.

He remains just as excited today, as he was three years ago.

"We're looking forward to presenting Guaraldi's little-known Mass once again, in a worship setting," he said. "The invitation came from internationally known organist and church musician Mark Laubach. His parish is celebrating its 200th anniversary, and the church council wanted to do something unusual. So the church choir will sing 'Missa Marialis' from the old red Episcopalian hymnal, and Presbybop will supply Guaraldi's accompaniment.

"As I've been working through the material once again, I'm struck anew by its brilliance. Guaraldi's settings are quite melodic, and the harmonies are beguiling. The outstanding St. Stephen's choir is thrilled to sing this wonderful music, and I'm reminded of how important it is to keep this music in the air.

"What a privilege this is!"

This is a rare opportunity to hear Guaraldi's composition in a worship setting similar to that where it first was conceived. All involved are pleased to offer this event during the 200th anniversary year of St. Stephen's.