And the Hits just keep on coming!

As Guaraldi fans know, this is a big year for Dr. Funk — being the 50th anniversary of both his Grace Cathedral Jazz Mass, and the television debut of his Peanuts themes in A Charlie Brown Christmas — and Fantasy Records isn’t missing the opportunity to acknowledge these milestones. 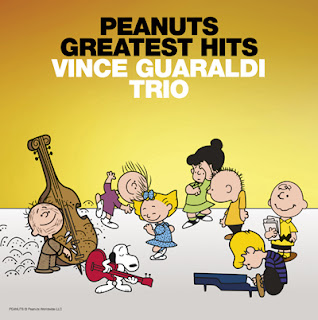 The first treat arrives today, with the CD release of Peanuts Greatest Hits, a fresh assortment of Guaraldi’s most iconic themes for Charlie Brown, Snoopy and the rest of the gang. (A brand-new vinyl version will follow in September.) You’ll find the usual suspects, most notably “Linus and Lucy” (of course!), “Charlie Brown Theme,” “Oh, Good Grief” and his three compositions from A Charlie Brown Christmas. But the collection also includes a track that is relatively new to Fantasy: Guaraldi’s vocal rendition of the droll “Little Birdie,” previously available only on Peanuts Portraits.

Fantasy once again was gracious enough to let me write some new liner notes, and I wove that essay around a tantalizing “what if” that might have taken place in an alternate universe. In our real world, the first Guaraldi Peanuts tune most of us heard was “Christmas Time Is Here,” which plays over the opening scene in A Charlie Brown Christmas. But what if director/producer Lee Mendelson had been able to sell his earlier documentary, A Boy Named Charlie Brown, to a television network? How would that have affected the sequence in which we initially heard the 12 tracks on this new collection?

(Hey, I needed a fresh “hook” with which to approach these liner notes, and that seemed as good as any!)

Fantasy has additional plans between now and the end of the year. The 1998 CD release, Charlie Brown’s Holiday Hits, will be re-issued on vinyl. Much more ambitiously, 2009’s double-CD set, The Definitive Vince Guaraldi, will be re-released as a 4-LP, 180-gram vinyl box set: a lovely package that will include a poster of Schroeder and Guaraldi, enhanced liner notes with lots of 1960s-era Guaraldi photos and ephemera from my personal collection. Finally, perennial favorite A Charlie Brown Christmas will celebrate its golden anniversary in multiple formats (final details not yet set; stay tuned).

Those of us who still prefer the “warmth” of vinyl clearly have ample reason to celebrate.

Fantasy and the Concord Music Group have generously agreed to offer a few free CD copies of Peanuts Greatest Hits to my faithful blog followers. Merely handing them out would be too easy, so I’ve decided to turn it into a contest. Discs will be sent to the first five people who correctly answer this question:

Name two non-Peanuts Guaraldi compositions that he recorded on more than one Fantasy (vinyl) LP, back in the day (prior to 1970). Do not include 1964’s Jazz Impressions in your search, as its entire contents are drawn from earlier albums. And remember: Fantasy only. Don’t send me titles that popped up on Warner Bros., Crown or any other label.

Send your answers to the e-mail address at right ("Email Derrick"). Please do not send them as comments, because I'll simply delete them. (Besides which, I'll need your e-mail address.)

The contest is over, and many thanks to all of you who participated. Frankly, I'm quite surprised; I wasn't aware my readership was this large, or this gracious. Many of you wrote very nice comments about this blog, and my book, which I greatly appreciate. Makes all the supplementary research efforts even more rewarding.

That said, the correct answers are:

And our five winners are:

CDs will be on their way to you soon!

I spent an engaging 90 minutes Sunday morning at the Fair Oaks (California) Presbyterian Church, watching and listening as McDaniel and his singers worked through numerous selections on the program of the upcoming Guaraldi Jazz Mass Tribute Concert, taking place at 2 p.m. Saturday, August 15, at San Francisco’s Grace Cathedral. The weekly rehearsals began July 5, and they’ll continue each Sunday morning through August 9, with a final dress rehearsal Thursday evening, August 13.

McDaniel’s all-adult choir is roughly 70 members strong, and their well-trained voices filled the large, classroom-style music room with a joyous sound. In a word, the group is terrific. After running through a couple of the jazzed-up hymns that Guaraldi arranged for his Mass, McDaniel surprised me — I was sitting quietly in the back of the room — by asking what I thought.

“Actually, it’s rather spooky,” I said, and his gaze adopted a puzzled expression, until I elaborated. “If I close my eyes, it’s like listening to the original LP recording. You all sound awesome.”

As the August 15 event is a concert, as opposed to a formal church service, McDaniel and pianist Jim Martinez are supplementing Guaraldi’s Jazz Mass elements with additional choral pieces. Thus, the Fair Oaks Presbyterian singers have been learning not only the Mass’ vocal selections — “Kyrie Eleison,” “Come with Us, O Blessed Jesus,” “Nicene Creed (I Believe),” “Adore Devote (Humbly I Adore Thee)” and the lovely background chant and “Hallelujahs” behind the primarily instrumental “Theme to Grace” — but also five other hymns: “Come to the Music,” “Praise God,” “Total Praise,” “When I Survey the Wondrous Cross” and “Worthy to Be Praised.”

Martinez and his band, meanwhile, have been working up the Mass’ instrumental compositions: “In Remembrance of Me,” “The Holy Communion Blues” and the aforementioned “Theme to Grace.” Given Jim’s fondness for Guaraldi’s music, I’m sure he’ll also include a few other familiar tunes.