Once more unto the breach, dear friends...

Today marks the debut of yet another edition of Guaraldi's score for A Charlie Brown Christmas, officially dubbed the "Snoopy Doghouse Edition." The disc itself is the same as the 2012 remastered edition (covered in a previous blog entry), but the CD sleeve has blossomed into something truly unusual. 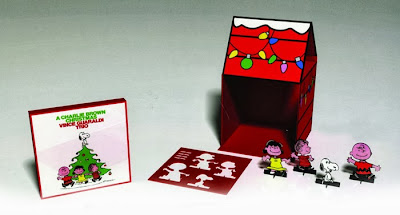 As you can see in the photo above, the customized sleeve unfolds and converts into Snoopy's decorated doghouse. The package also comes with four character cut-outs and stands, so that a dedicated fan can set up a tiny holiday tableau, as shown. (I can't help noticing that the relative scale of the figures and doghouse is somewhat off, but maybe I'm being unduly picky.)

For as long as the link functions, Concord's YouTube Channel features a cute "unpacking video" that can be viewed here.

It's an intriguing marketing ploy, which reminds me of the opulent debut release of Guaraldi's Jazz Impressions of a Boy Named Charlie Brown, back in December 1964. Fantasy issued the first printing of that LP with a gatefold album jacket that included a dozen 8-by-10, frame-ready Charles Schulz "posters" of the Peanuts gang. (See my Guaraldi discography for further details about that album.)

I've honestly lost track of how many versions of this album sit on my shelves, but Fantasy certainly has my number; I obviously need to get this one, as well.

But this release does beg the obvious question: How many times can Fantasy sell the same product to the mainstream public? And if last year saw the arrival of what one assumes is the ultimate re-mastered edition, followed this year by a variant with cute packaging, what will the label do in 2015, to celebrate the album's 50th anniversary?

The mind doth boggle...
Posted by Derrick Bang at 1:00 AM

Personally, I would like (1) a completely re-mixed version from the original performance tapes, cleaned and spiffed up with 21st Century processing tools, using the performances represented on the original LP (i.e., some of the same loving, sonic care lavished on the 2006 remixed version, but using all of the nostalgically familiar performances), that (2) includes all of the bonus tracks and alternate takes included on prior releases, as well as (3) any other complete, alternate takes that may be sitting in the vault (e.g., as mentioned in a comment on a prior entry, the vocal performance of "Christmas Time is Here" used in the opening of the TV special is different than what appears on the LP, and has never been released commercially: http://impressionsofvince.blogspot.com/2012/12/will-preferred-soundtrack-please-stand.html#comment-form )