Orange is the New Gold

We're coming up on a couple of important anniversaries for Guaraldi's Peanuts music, and the first will land in about six weeks.

Guaraldi's first Peanuts album — Jazz Impressions of A Boy Named Charlie Brown — was released in December 1964. Technically, then, the album won't celebrate its 50th anniversary until the end of this year ... but Fantasy Records isn't waiting that long. 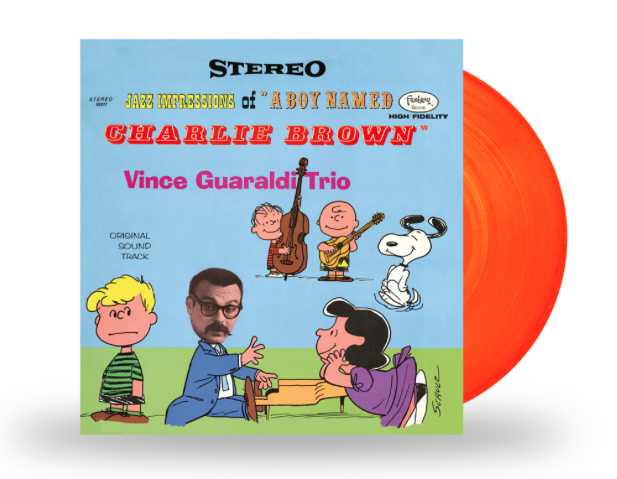 A limited-edition, collectible vinyl reissue of the original album will be released on May 13 by Fantasy, via the Concord Music Group. All concerned have worked hard to restore the original 1964 gatefold LP cover design, and the package also includes reproductions of the 8-by-10 Charles M. Schulz lithographs that were included inside first-edition releases.

Finally, the disc itself will be orange, as a nod toward Fantasy's original gimmick of issuing records on colored vinyl.

(Don't ask me why orange, rather than gold, which is appropriate for a golden anniversary.)

This collector's-edition vinyl will be readily available via Amazon and any music store willing to order and stock it.

In addition to this vinyl package, the album also will be re-released on CD on the same day (May 13), where it has been enhanced with 24-bit remastering by engineer Joe Tarantino, who has handled the remastering work on several Guaraldi re-releases. The CD booklet will include a lengthy new essay by my own self; I once again was delighted to assist with another of Fantasy's loving acknowledgments of Dr. Funk's legacy. (For those who might be curious, my essay is available only with the re-mastered CD, not with the LP.)

And I know what you're thinking: Additional surprises? Bonus tracks?

Well, bonus track (singular). The remastered CD includes an alternate take of "Baseball Theme," a variant which — as I briefly explain, in my essay — is performed at a gentler tempo that more closes matches the version heard in the actual documentary.

Concord has set up an entire media page for the album, which you'll find here. The site includes a detailed press release, the album art, a link to the "Fans of Vince Guaraldi" Facebook page, and, thanks to SoundCloud, a means of sampling the music itself.

Original first-gen 1964 vinyl pressings of this album — with both vinyl and gatefold packaging in nice condition — are extremely hard to find. Those that include the Schulz mini-posters — also in nice condition, without (eek!) tape marks or thumbtack holes — are as rare as hen's teeth. (And quite expensive, when they do surface.) This is a chance to reach back 50 years and own a little slice of Guaraldian history.

And I must admit, the prestige approach taken with this album makes me wonder how Fantasy/Concord will top itself next year, when Guaraldi's score for A Charlie Brown Christmas celebrates its golden anniversary...
Posted by Derrick Bang at 10:28 AM

Hooray! That's great news, and a definite purchase for this Guaraldiphile. (Now the big question is: Do I buy *both* the CD and vinyl versions?)

I really like that Concord has set up a website for that release, and it's even better than this entry led me to expect: By "sample" the music, you mean it lets you listen to the full tracks! Including the wonderful, previously unreleased "Baseball" alternate performance. Very cool! ( http://mediakits.concordmusicgroup.com/p/a-boy-named-charlie-brown/listen.html )

And speaking of which, that delightfully clear stretch of new audio adds further weight to the suspicion that Vince may have re-recorded some of those tracks with different sidemen. (I suspected that based on my endless close listings that went into the charts for the prior 2 blog posts, but the poor audio quality of the "Boy Named Charlie Brown" documentary audio made it difficult to tease out some of the subtleties.) Listen closely to the bass on the two variants of "Baseball Theme" and see if you don't think that each represents the style of a different bassist. On the original LP version, the bassist is (during the non-improvisational stretches) largely on-beat, and hanging slightly toward the back end of the beat. On the alternate, the bassist seems to attack the front end of the beat, and does a lot more walking around. Each bass approach has a significantly different stylistic feel: The former "anchors" the piano and drums, while the latter is more of a parallel, improvisational melody. (While the latter may be more audacious, I actually slightly prefer the former, for letting Vince's melody carry more of the performance.)

See what you think...

Is the track "Fly me to the moon" also on the new CD version?

It is great to have the original cover back after all these years!

Frank: You can see the CD contents via the Concord link I supplied above ... so yes, "Fly Me to the Moon" is included as part of the package, along with the variant "Baseball Theme." But no, the alternate "Frieda" and "Schroeder" takes (from "Peanuts Portraits") are not included. I agree that it would have made sense, but I guess Fantasy decided against that notion, since "Peanuts Portraits" is such a recent release.

Prompted by Frank's query, I went back and compared the "alternate" takes of Frieda and Schroeder on "Peanuts Portraits" with the originals on "Jazz Impressions of A Boy Named Charlie Brown" (ABNCB).

To my surprise, I found that the "alternate" version of Schroeder on "Portraits" is actually the *same performance* used on the "Boy" LP. It's just that, for ABNCB, they cut about a minute out of the middle (the second repeat of the "verse"), perhaps to fit the program length on an LP side. The first 1:01 of the two tracks is identical, as are the final 53 seconds.

The "Frieda" version that appears on "Portraits" is an honest-to-goodness alternate performance. (And I share frank-oliver's wish that it also had been included as a bonus tract on the upcoming 50th anniversary release.)

I am new to your blog but am a big fan of Vince's music. I see they include some details about the remaster for CD but there isn't any hard info on the vinyl pressing. They say reissue rather than remaster which makes me go "hmm" - I'd like to know if they struck up a new master from the analog tapes (which would be excellent), are using an old master that's been sitting around (not so hot), or are using the new CD master (in which case buying the record is more about the packaging). The older CD version of this album (as I'm listening to it on Spotify) is pretty noisy and could certainly be improved upon. I also hope they use a good pressing plant.

Welcome aboard, Simón! That's an excellent question. The LP contains absolutely no information about sourcing, so let me see if I can get an answer from somebody in the know. If so, I'll amend this post accordingly.

Doug, you're right about the alternate version of Schroeder actually being the same performance as the ABNCB LP version. But rather than the LP version being a cut version of the Portraits track, it's the other way around. The Portraits track was lengthened by simply digitally copying and pasting the first 1:01 of the LP track to its beginning. In other words 0:00-to-1:01 = 1:02-to-2:03 on the Portraits track! Result: an artificially longer cue. Why? Your guess is as good as mine.