We’ve an embarrassment of holiday-themed riches this month, starting with not just one, but two terrific big band covers of the music from A Charlie Brown Christmas. 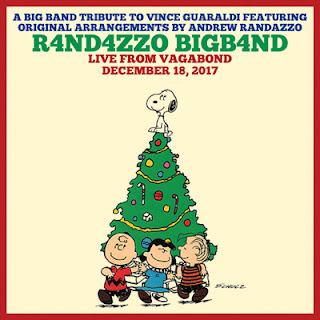 Richmond, Virginia, is blessed with a full-blown swing band fronted by bassist/arranger Andrew Randazzo, which performs as the R4nd4zzo Big Band. The 15-piece unit boasts four trumpets, three trombones, four reeds and a rhythm section of keyboards (Jacob Ungerleider), guitar (Alan Parker), bass (Randazzo) and drums (DJ Harrison). The ensemble presented a swinging tribute to Guaraldi’s Charlie Brown Christmas to a packed house at Richmond’s Vagabond on December 18, 2017; the performance was recorded and released as a Bandcamp digital album a month later.

Can’t imagine why it took so long for me to find it; this album definitely shouldn’t be missed.

Aside from his inventive arrangements, Randazzo also has a cheeky sense of humor; the classic holiday tunes and Guaraldi originals have been given fresh titles that occasionally require a bit of thought … such as “SK8N,” which features unison brass on the familiar melody, following Randazzo’s tasty solo bass introduction. The pace picks up, with Toby Whitaker and JC Kuhl delivering cool solos on (respectively) bass trombone and baritone sax.

The set actually kicks off with “Tannenbomb,” which begins in gentle Guaraldi fashion; the full band then sets a mid-tempo pace for sleek solos on piano and brass, against Randazzo’s bass comping. The ensemble returns to the melody and then concludes with a double-time burst of speed. The mid-tempo “Drum Closet” (“My Little Drum”) is dominated by groovy rolling percussion, the melody taken by brass against Parker’s guitar comping. Parker similarly dominates the melody in a thoughtful cover of “Black Friday” (“Christmas Time Is Here”), and he also gets plenty of exposure — notably during a lengthy bridge solo — in “Whose Baby Is This!?”

A few arrangements may challenge Guaraldi purists, starting with an unusually contemplative, mid-tempo reading of “Linus, Single Again,” dominated by Ungerleider’s sweet piano solo and some cool rhythm work. But the stand-out, for exploratory ambition, is “Xmas on a Thursday,” a deconstructed handling of “Christmas Is Coming,” dominated by funky bass and percussion, a barely recognized melody in a minor key, and an acid rock electric guitar solo that soars into outer space … after which the track concludes with a traditional solo piano reading of “Fur Elise.” Far out, man!

The set finishes with a gentle reading of “Chestnuts,” featuring guest vocalist Roger Carroll; Randazzo’s acoustic bass solo at the bridge is particularly lush, backed by unison brass comping. The horns takes over the melody when Carroll returns to croon the iconic tune to a close. At which point, a very good time clearly has been had by all.

(One minor issue: I rather doubt Peanuts Worldwide, Fantasy/Concord and all others concerned would be pleased by this set’s digital album cover!) 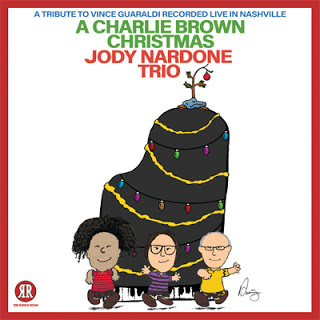 Nashville-based jazz pianist Jody Nardone maintains an impressively busy performance schedule, and for the past several years has included holiday tribute concerts to Vince Guaraldi’s iconic music from A Charlie Brown Christmas. 2018’s sold-out show took place in front of an enthusiastic audience at Nashville’s City Winery; the gig was recorded and has just been released as (no surprise) A Charlie Brown Christmas.

Nardone, a veritable keyboard monster, is joined by trio members Jerry Navarro (acoustic bass) and Chris Brown (drums). The lengthy concert includes covers of every track from Guaraldi’s 1965 album, along with additional treats. Although easily capable of replicating Vince’s gentle bossa nova touch — as evidenced by the album’s opening medley of “The Great Pumpkin Waltz” and “Thanksgiving Theme,” and also during “What Child Is This” — Nardone is much more aggressive with his improvisational bridges. He favors ambitious chord structures, whereas Guaraldi leaned toward single-note runs and filigrees.

That distinction is key; it makes this album’s listening experience pleasantly familiar, but by no means slavish.

Nardone’s improv work is playful during “O Tannenbaum” and “The Charlie Brown Theme,” and his “Christmas Time Is Here” is soft, sweet and lyrical, with a lovely keyboard interlude at the bridge. These early tracks definitely channel Guaraldi, but Nardone’s own style becomes more prominent as the performance proceeds. The shift occurs during the quintessential “Linus and Lucy,” when Nardone makes the second bridge distinctly his own.

The audience subsequently gets a couple of engaging “his and mine” examples, starting with Nardone’s “Guaraldi version” of a fleeting melody (“Surfin’ Snoopy”) heard in the TV special — during a comic encounter between Schroeder, Lucy and Snoopy — but not included on the original album. Having tickled patrons’ memories, Nardone and trio then launch into their version of “Surfin’ Snoopy”: a double-time blast of energy with jaw-dropping solos by all three musicians.

This one-two punch repeats with Nardone’s solo keyboard duplication of Schroeder’s nod to Beethoven, on “Fur Elise.” But that’s not Christmas jazz, Nardone cheekily insists, at which point he and the trio launch into a lively blend of Beethoven and Brubeck/Desmond, with an arrangement dubbed “Five Elise.” Once again, the dynamic solos bring down the house.

The cutest interlude comes when Nardone instructs the audience on how to deliver the chanting elements of Guaraldi’s arrangement of “My Little Drum,” and then performs the tune to the Nashville crowd’s impressively accurate unison vocal. Very inspiring.

Other highlights include Nardone’s gentle, achingly sweet solo piano arrangement of “Hark, the Herald Angels Sing”; his great keyboard runs during the lyrical “Skating”; and the ambitious chord work and tempo shifts during the rock-inflected “Christmas Is Coming.”

The trio obliges the call for encores with engaging covers of “Santa Claus Is Coming to Town” and “Have Yourself a Merry Little Christmas.” By which point, the listener has had plenty of merry, but the experience has been far above little.

In other news, Fantasy/Concord has made a tradition of teaming with various venues for special-edition LP releases of A Charlie Brown Christmas, and this year is no exception. Urban Outfitters has a limited-issue version in metallic silver vinyl; not to be outdone, The Sound of Vinyl has an "exclusive picture disc."

And if that isn't enough, dedicated collectors also should be on the lookout for the 3-inch RSD3 Blind Box partial edition — designed for the RSD3 mini-turntable — featuring four tracks from Guaraldi's original album: "Christmas Time Is Here" (vocal), "Hark, the Herald Angels Sing," "Linus and Lucy" and "Skating." Each track also comes with its own pull-out poster.

Finally, if you're near Orchard Park, New York, this Friday evening (December 13), head to the Orchard Park High School Auditorium, where guest pianist Jeffrey Biegel will join the Orchard Park Symphony Orchestra in a program that includes the "Christmas Movement" from Dick Tunney's recently composed Peanuts Concerto. Details are here.

All of this should keep everybody busy for awhile!

Thanks for the tip on the Randazzo recording -- a lot of fun, with an authentically vintage vibe!

Yes, I particularly liked the 5th track (Black Friday) that melds Herbie Hancock's mellow 'You'll Know When You Get There' with 'Christmas Time Is Here'.