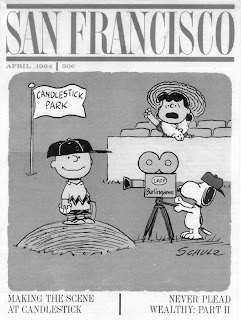 "Not at all. For one thing, we keep changing the way we do it. Basically, it's only a skeleton to improvise on, to play new chord uses on. Oh, when you do it six times a night, it can get to be a bore, but I'm not really tired of the tune. I play better on my own compositions anyway. The main thing is the feel you get when you're really communicating, and 'Cast Your Fate to the Wind' helps to reach people. The concert we did at the Museum of Art recently with Bola Sete, that had the happy feel to it."


With respect to artistic freedom...

"I'm doing what I want to do. I improvise. That's my bit, along with composing. I couldn't and wouldn't do anything else. Whether the tune is a hit, or a standard, or a new piece, it's going to be unique, because it's me playing it."

And, finally, on the subject of his preference for remaining in San Francisco:

"If you're raised here, you dig it. The weather, the seasons, everything. I'd just as soon stay. I've been east, and it's just not for me."

Guaraldi was a dedicated liberal, always willing to lend his talents to the Civil Rights movement or any other worthwhile cause. As a result, he jumped at the opportunity to help raise money for the 779 UC Berkeley students -- members of the campus political organization SLATE -- who were arrested during a December 3 free speech march.

SLATE organized a concert starring Guaraldi, Jon Hendricks and Les McCann, scheduled to take place December 14, 1964, at UC Berkeley's Wheeler Auditorium. A mere three hours prior to curtain time, campus administrators refused use of the venue. SLATE immediately re-located to the nearby Finnish Hall, and the concert went off as scheduled.

It's worth being reminded of the tactics employed by said campus administrators, in response to the so-called "student strike," as reported at the time by Nation journalist Gene Marine: 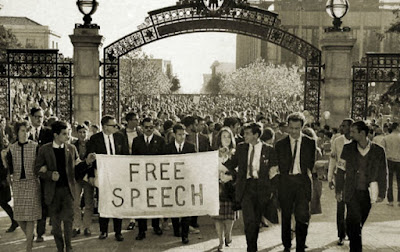 Months of civil rights demonstrations have taught metropolitan police officers everywhere to handle “limp” demonstrators; it requires two officers per demonstrator, and it can be efficient and painless. In Sproul Hall, however, police chose to drag the students, male and female, by twisting their arms into hammer locks, bending their wrists cruelly backward, and hauling them so that the pressure was on their sockets. One girl was pushed into the elevator on her face from several feet away. It should be stressed that there were reporters on the scene—but the police didn’t always know it. Downstairs, they were letting no reporters go up.

After about forty arrests had been made, the police saw that the process was taking too long. They withdrew temporarily (the students now call this “the coffee break”), and when they returned had apparently decided to get rough. The new plan was to bring women down in the elevator, and men by the narrow marble stairs, although a few unfortunate women also made it down the stairs. Some were brought down by arms or shoulders, but reporters present say that most were hauled by their feet. One conscientious reporter counted the marble steps as he followed a girl whose head jarred sickeningly as she was dragged down. There were ninety….

On Thursday afternoon, I watched the end of The Day of the Cops. There was no civilian authority anywhere on the campus. President Kerr was still in Los Angeles. Chancellor Edward Strong, chief Berkeley administrator (Kerr runs all nine university campuses), had disappeared. The University of California was completely in the hands of police. In every window of Sproul Hall a police guard was visible. There were guards on every door. Police patrolled the campus.

No additional words necessary.
Posted by Derrick Bang at 9:44 AM