Dick has been kind enough to keep me apprised of the concerto’s evolution, from its genesis a little more than a year ago. You can read more in previous blog entries, here, here and here.

I’ll turn the rest of this post over to Dick, who — understandably — is delighted to have completed this project, and is extremely pleased over how it has turned out.

The final decisions on song selection, sequence of songs — and the like — changed considerably during this yearlong process. The obvious hero in this was Vince Guaraldi, and his creative fingerprints are (hopefully) all over this work. Weaving the jazz harmonies into a classical orchestral setting was challenging, but there are plenty of “fragments” that really did lend themselves nicely to the symphony.

The songs included in some fashion are: “Linus and Lucy,” which actually appears in some form in all three movements; “Thanksgiving Theme”; “Red Baron”; “Oh, Good Grief!”; Beethoven’s Sonata Pathetique (tipping our cap to Schroeder); “Happiness Is”; “Rain, Rain Go Away”; “Skating”; “Christmas Time Is Here”; and “O Tannenbaum.” Some songs were chosen for their popularity and visibility; others were selected for their musical content, as juxtaposed with the orchestra in a classical setting. (A prime example is “Rain, Rain Go Away.”). I researched all of this pretty thoroughly, watched several television specials, and scoured the landscape for Guaraldi recordings of everything we could get our hands on.

One of my original thoughts was to make the middle movement — historically the slower movement, in a piano concerto — the Christmas movement. However, when all was said and done, the Christmas movement became the third and final movement: the “finale,” if you will. This third movement also has been constructed so that an orchestra with pianist can perform it as a stand-alone piece.

I teased “Linus and Lucy” in three or four different places, before finally concluding the entire work with that most iconic of Peanuts music.

This has been more than a year in the making, and to be at this point seems surreal. Last Thursday, I sent the final score and individual parts to the orchestra office in Kentucky, and was in contact with the Peanuts folks — and Jeffrey — about delivery of the final files. I walked downstairs from my studio around 3:00 p.m. that day, looked at my wife, and thrust both fists into the air.

The final piece of the puzzle is inserting piano fingerings into the main score. Jeffrey has been practicing on this for a couple of months, and has sent me hand-written fingerings, a few note changes and some phrasing and articulation edits. These final elements will come together this week.

My wife and I will attend the rehearsal (my score in hand) as well as the March 23 premiere.

Hopefully, this 21-minute piece will bring smiles to the faces of those who are familiar with Guaraldi, and the Peanuts television specials, and — better still! — will introduce some fantastic music to audiences of a generation likely removed from the Peanuts comic strips. 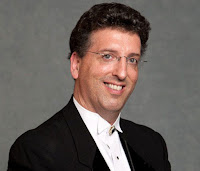 One last quick note from the site-master. As of Sunday, Jeffrey Biegel has become a Grammy-recognized pianist/composer. He performed on the Grammy Award-winning recording for Best Classical Compendium, as a soloist on Kenneth Fuchs’ Spiritualist Piano Concerto, on the Naxos label. Biegel commissioned the concerto, which resulted in several performances and this recording, with the London Symphony Orchestra. The actual Grammy Awards were presented to conductor JoAnn Falletta and producer Tim Handley; Biegel received a certificate as an artist on the recording.

Ergo, Jeffrey will be sliding directly from a classical Grammy triumph to an exciting new work honoring Guaraldi’s Peanuts compositions. Quite a heady way to start the year!
Posted by Derrick Bang at 1:27 PM