Vince in a symphony hall!

This should be a very exciting year for Guaraldi fans.

Nashville-based musician, composer and arranger Dick Tunney has been commissioned to create what is being dubbed a Peanuts Concerto: an ambitious work that will morph Guaraldi’s most recognizable themes into a symphonic fantasy for solo piano and orchestra.

The project was spearheaded by Tunney’s colleague Jeffrey Biegel, a celebrated New York-based pianist/composer whose accomplishments and accolades would tax even the most encyclopedic biographer.

“He’s a tremendous player,” Tunney notes, during a recent chat, “an off-the-charts, crazy-good Juilliard artist. When he gets something under his hands, he owns it.”

“I read an interview with Charles Schulz’s son Craig, back in 2013 or so,” Biegel explains, picking up the narrative. “Craig was struck by something that worried his father, who at one point wondered aloud, ‘Do you think they’ll remember me?’

“Well, in his case, of course. But the thing is, everything you’ve done, when you pass, it’s over. People will think less about you, and what you’ve done, if you’re not around any more. I sent Craig an email, and told him that really hit home, because not only should Schulz and Peanuts go on, but what about the music? Vince Guaraldi’s Peanuts music is either locked up in those specials for eternity, or they’re only heard in orchestral versions usually adapted from the Christmas special.

“There’s not a new performance work at all, based on Guaraldi’s Peanuts music ... and certainly not a concerto for piano and orchestra. So I’ve been commissioned to take the music from those TV specials, and place them into a musical work that orchestras can book and present to audiences.”

Biegel has developed an artistic business model that has been successful for 20 years: He initiates projects with composers; raises all the money from donors and orchestras, to pay the composer to write a concerto for him; and then he (Biegel) gets to play it with the orchestras involved.

“I’m always thinking of ways to bridge the gap between the old and the new,” Biegel continues. “I’ve done that with several composers: Keith Emerson, Neil Sedaka, Peter Tork and Jimmy Webb ... and now Guaraldi.” 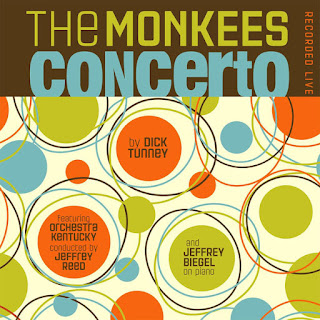 Biegel secured the necessary permissions from Peanuts Worldwide and Lee Mendelson, who owns Guaraldi’s music. Tunney was the logical choice for arranger, since the two recently collaborated on a similar project, the Concerto for Piano and Orchestra: The Monkees, which Biegel debuted during a January 2015 world premiere performance with Orchestra Kentucky. One reviewer described this work as “a condensed, virtual run-through of The Monkees’ most memorable songs [in a] modernistic framework akin to Grieg’s Piano Concerto in A minor.”

“I thought carefully about who would take the music, and turn it into a piano and orchestra piece,” Biegel remembers. “I thought of Dick, because he wrote that absolutely beautiful piano concerto based on the music of The Monkees.”

“The thing that makes such pieces work, when you cross genres,” Tunney explains, “when you go out of 1960s rock ’n’ roll and into classical, is that the composition must include the marquee pieces. So there were many songs that had to be used, because every Monkees fan would wonder where this or that was.

“When I started putting it together, Peter Tork got into the loop, so I sent him a list of songs from which I would pull, to create the concerto. He added only one song, which came from the feature film they did — and who even knew they did a feature film? — called ‘The Porpoise Song.’ Tork said that hardcore, true-blue Monkees fans would want that song, so I opened the second movement with it.”

Both Biegel and Tunney recall watching the Peanuts TV specials as kids, and digging the music, but the latter didn’t embrace it until quite recently.

“Jeff Reed, a conductor friend with Orchestra Kentucky, does a children’s concert each year, the Monday after Thanksgiving,” Tunney explains. “He presents three of them during the day, and brings kids in from all the local elementary schools. He does it in a symphony hall, so the kids are exposed not only to the orchestra, but also the venue and everything that goes with it.

“So in 2016, Jeff said that he wanted to include something fun, like a Peanuts overture. That forced me to really dig in on ‘Linus and Lucy.’ I’d previously picked around with it, but — to me — it’s one of those pieces that you have to woodshed on your own, and then put the music away and just feel it.

“Digging in on that tune, happily, forced me to really dig in on Guaraldi.”

“I’ve never been much of a jazzer, as a player, but I completely admire it. The guys who can instantly translate that ad-lib stuff from their head to their hands — the Oscar Petersons of the world — just astonish me. I can’t even begin to think that quickly, in those turns.”

Fortunately, virtuoso keyboard chops can be left to Biegel.

As was the case with the Monkees project, Tunney has no shortage of iconic themes from which to draw. He plans to include “Christmas Time Is Here,” “Skating” (“I love that one!”), and “Thanksgiving Theme,” among others.

“I’ll also pay homage to the classical side, with a little Schroeder stuff,” he adds. “ ‘Fur Elise’ probably will make a 30-second appearance, and I’ll tip my hat to a Chopin thing that Guaraldi called ‘Schroeder.’

“The way I’m going to structure it, the middle of the three-movement concerto will be the ‘Christmas Movement.’ It’ll be something that can be extracted as a stand-alone piece, for a conductor who needs an 8-minute something with a guest pianist.

“And I want to start the third movement with the Thanksgiving theme, with a really aggressive unison orchestra playing the opening. So many of Guaraldi’s Peanuts pieces are waltzes, and like jazz shuffles. If there’s an honorable way to straighten out some of that rhythm, keep the integrity of the melody, and lean it a little more toward a classical direction ... that’s my intention. I want to bridge the symphonic with the jazz combo genre, as opposed to just doing a bunch of jazz waltzes with a string band attached.

“I want the songs and the piano to be the stars, and then wrap the orchestra around them as an almost equal partner. I want Guaraldi and the songs to shine, but I also want the orchestra to have its moment in the sun.”

Biegel embraced Guaraldi’s Peanuts music quite early, in part due to serendipity.

“It actually started with my name,” he laughs. “Growing up, people called me Snoopy, or ‘Snoopy Biegel,’ or even Schroeder. I grew up with Vince’s music. Somebody eventually gave me a print-out of the piano versions of all the music from the Christmas special, and I played them constantly. And everybody always asked me to play ‘Linus and Lucy.’ 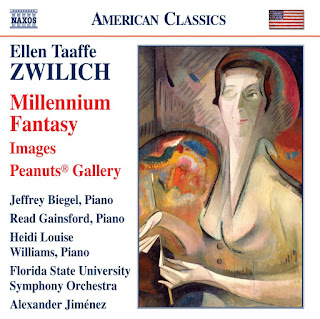 “She and I became friends in November 1998,” he recalls, “shortly after she wrote her Peanuts Gallery concerto. I approached her with a project, and she agreed to write The Millennium Fantasy for me. I gave her the title, and I got 27 orchestras involved, and the rest is history.”

Biegel premiered The Millennium Fantasy with the Cincinnati Symphony Orchestra in 2000. Roughly a decade later, when Zwilich was approached to record that piece for album release, she contacted Biegel and suggested that he perform Peanuts Gallery for the same disc. The resulting CD was released in 2010 on the Naxos label.

He now looks forward to a fresh visit to Schulz’s world of precocious children — and a Walter Mitty-esque beagle — with this new project.

“I’ve always loved Vince’s music,” he smiles. “This will be very attractive for orchestras: not only for young audiences, but for our age group, because we grew up with those specials. I want the music to live on through live performances, and this seems to be one way to do it.

“This takes the music ‘out of the box’ and gives everybody a new, fresh way of hearing it. That’ll help keep the music alive.

Throughout the conversations with Biegel and Tunney, it was abundantly clear that both have plenty of enthusiasm and respect for the emotional resonance of Guaraldi’s music, and the need to honor that spirit.

“There’s nothing without that,” Biegel concludes. “As my teacher used to say, you can’t feel from the outside in; you have to feel from the inside out.

“It’s not a commercial thing; the selling point is to the heart.”

Biegel and Tunney have promised to keep us updated, as this project proceeds. Stay tuned!
Posted by Derrick Bang at 1:34 PM