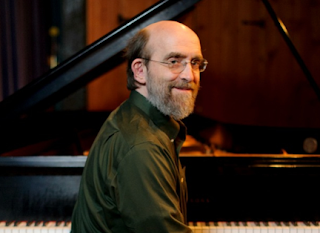 George Winston needs no introduction to this blog; his devotion to Guaraldi pre-dates mine by a few years (albeit only a few!), and he has demonstrated his fondness with two gorgeous cover albums: 1996's Linus and Lucy: The Music of Vince Guaraldi, and 2010's Love Will Come: The Music of Vince Guaraldi, Volume 2. Nor has George stopped; he tirelessly seeks out and puts his own spin on additional Guaraldi recordings, even meticulously examining brief solos on Vince's recordings with (for example) Cal Tjader.

This fixation is about to bear fruit once again, as George soon will release Bay of Gold: The Music of Vince Guaraldi, Volume 3.

But these albums weren't George's first opportunity to interpret the music of his favorite Northern California-based jazz cat. Peanuts fans know that George was one of several noted musicians selected to score individual episodes of the 1988-89 eight-part animated miniseries, This Is America, Charlie Brown. His assignment, The Birth of the Constitution, ran second in the series, debuting on October 28, 1988.

George routinely writes quite extensive liner notes for his albums, often with additional information available on his web site. These notes read like an ongoing memoir, and in some cases I've gotten the impression that such essays might have been composed for an album project that never quite materialized. In this case, the notes were intended for an individual DVD release of The Birth of the Constitution, which Warner Bros. ultimately opted against. (George chose not to issue an album of his score, unlike Dave Brubeck and Wynton Marsalis, who did share their scores on CD.)

George recently has been going through his massives piles of notes, and he came across some items related to The Birth of the Constitution. He generously agreed to share them here, and so I'll turn the rest of this post over to him.

Take it away, George!

I was amazed when Lee Mendelson contacted me in 1988, about recording this soundtrack. After Vince’s untimely passing in 1976, when everyone decided to continue the Peanuts animations, I had imagined some time recording the soundtrack for an episode, and especially to use a Guaraldi song that he himself had not used in any of his 16 Peanuts scores — as I did here, with "Cast Your Fate to the Wind" — and also to use as many Guaraldi songs as possible, also keeping in mind first and foremost what Lee wanted.

Email ThisBlogThis!Share to TwitterShare to FacebookShare to Pinterest
Labels: Cast Your Fate to the Wind, Charlie Brown, Dave Brubeck, George Winston, Lee Mendelson, The Birth of the Constitution, This Is America, Wynton Marsalis
Newer Posts Older Posts Home
Subscribe to: Posts (Atom)
Visit my Guaraldi web pages to learn more about his discography, his work on the Peanuts TV specials and more.
Visit McFarland's web site to order copies of my book Vince Guaraldi at the Piano.