The schedule gets busier every year ... and isn't that marvelous?

The holiday season returns anew, and it's once again time to investigate the many Guaraldi-themed concerts taking place, most of which (of course!) are tied in to his music from A Charlie Brown Christmas.

I traced the history and growth of this delightful tradition back in 2012, with a modest schedule that now seems quaint. This new post will serve as a clearinghouse for any and all late 2016 concerts that come to my attention. As always, I'll add to this schedule as new information becomes available, so do check back on occasion. 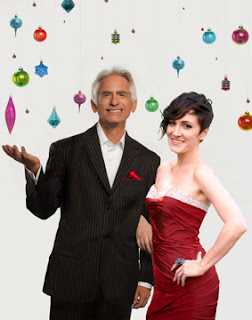 As has been the case for several years now, the most ambitious tour news comes from Concord recording artist David Benoit, who once again is taking his Christmas Tribute to Charlie Brown on the road. He's touring this time with special guest Sara Gazarek. Their schedule kicks off November 26 in Brea, California, and concludes December 19 in Livermore, California, with stops along the way in Washington, Alaska, North Carolina and Arizona. We caught Benoit's  performance in 2011 and 2015, and I can report that it's a great show. It's also tremendously sweet, since Benoit and his team work with a children's choir that is local to each stop. Check his website for details.

Benoit may be grabbing the lion's share of headlines in the States, but our Canadian neighbors will enjoy the return of the season's most historic booking. Drummer Jerry Granelli, who worked as a member of Guaraldi's trio in the 1960s, will headline Tales from A Charlie Brown Christmas with his own trio. The tour kicks off November 26 in Calgary, and concludes December 10 in Victoria. Alas, they're still all Canadian venues; he has yet to bring this show to the States. Granelli began this annual celebration with a few shows in 2013, and the results were quite popular (no surprise there). He'll again be joined by Simon Fisk (bass) and Chris Gestrin (piano). Check his website for details.

Dr. Funk’s fans have long awaited the wide release of The Anatomy of Vince Guaraldi, ever since its debut as a work-in-progress at the 2009 Monterey Jazz Festival. The completed Andrew Thomas/Toby Gleason documentary subsequently screened at more than two dozen film and music festivals during 2010 and ’11, garnering several awards along the way, while seeking a mainstream distributor: a necessary next step which — sadly — never materialized.

Years passed, as Andy and Toby continued to pursue every possible lead; Guaraldi’s fans began to despair. Many of them wrote me impassioned notes, hoping I’d have an inside scoop on the situation. Alas, my response always was the same: Nothing had changed.

The final barrier was the need to expand performance permissions — for the music used within the film — beyond the “festival license” level, in order to obtain the legal right to distribute The Anatomy of Vince Guaraldi via home video and streaming platforms. That isn’t cheap, and Andy and Toby had exhausted their own financial resources (hence the lengthy search for a distribution company, which would have handled such requirements).

But there is another option these days, at a time when crowd-funding has resulted in happy successes such as the creation and release of a big-screen sequel to the cult TV hit, Veronica Mars. Andy and Toby have set up a Kickstarter campaign, which went live on November 17. They have 31 days to reach a pledge goal of $61,000, and they’re hoping that fan interest will push them over that hurdle.

You can read an official press release here, and check out a 2-minute trailer here.

As with all Kickstarter campaigns, the various levels of financial support are accompanied by inducements: from a 16-page preview booklet, at the modest Jazz Cat level; to a producer credit that will appear at the beginning of the film — along with all the goodies promised at the levels in between — for those willing to become an Angel-Headed Hipster. Details are available here, and several of the promotional items will be available for shipment in time for the holidays.

Check it out, and you’ll surely agree: A wide release of The Anatomy of Vince Guaraldi would make a great Christmas/Hanukkah/Kwanzaa/Holiday-of-Choice gift ... not only for yourself, but for the entire jazz community. So pledge early, and pledge often ... and spread the word! 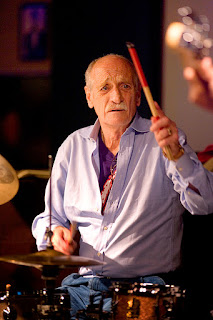 Jazz drummer Jerry Granelli, beloved in this blog as one of Guaraldi’s former sidemen, just received a tremendous honor at the annual Creative Nova Scotia Arts Awards gala, held November 5 at the Halifax Central Library. He was presented with the Portia White Prize, which recognizes cultural and artistic excellence in Nova Scotia — where Granelli has lived since 1988 — and those who have attained professional status and mastery in their discipline.

Among other things, Granelli was a prime mover in the establishment of the Halifax Jazz Festival, more than 30 years ago.

“When I recall ... how over the years you have trusted me with teaching your children, and supported the Creative Music Workshop as well as my performances, I feel such enormous gratitude,” Granelli said, during his acceptance speech. “And now to be honored with [this] award ... all I can really say is thank you. I will not stop.”

Additional coverage of this event can be found in the Halifax Chronicle Herald and the Nova Scotia Local Express ... although both articles repeat a grotesque error that has long circulated in Canadian newspapers, when discussing Granelli. Contrary to oft-published report, he is neither an “original” member of the Vince Guaraldi Trio, nor the “only surviving member” of the said trio: a claim that would be met with annoyance by Eddie Duran, Dean Reilly and Colin Bailey, all of whom preceded Granelli at Guaraldi’s side, and all of whom are still with us ... and, like Jerry, “not stopping.” (Talk about sloppy fact-checking. Sheesh!)

None of which is Granelli’s fault, of course, nor does it detract from the magnitude of his honor. Congrats and high-fives, Jerry! 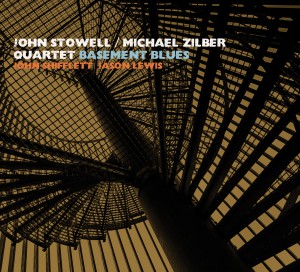 Finally, a small surprise: Basement Blues, the new album from the John Stowell/Michael Zilber Quartet — Stowell (guitars), Zilber (sax and piano), John Shifflett (bass) and Jason Lewis (drums) — includes a Zilber original called “Have Yourself a Vince Guaraldi Xmas.” I’m hard-pressed to detect any obvious nods to Vince’s classic score for A Charlie Brown Christmas — although faint suggestions of “Christmas Time Is Here” hover throughout — but the tribute itself is quite nice to see.
Posted by Derrick Bang at 6:00 AM No comments: