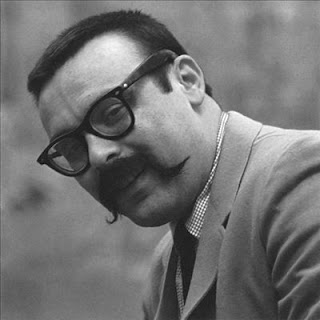 Aside from their savvy filmmaking skills, the folks at Blue Sky are equally adept when it comes to marketing and promotion. It would have been very difficult to miss hearing about The Peanuts Movie; we were reminded by everything from freeway billboards and YouTube videos, to the usual assortment of product tie-ins. By far the best gimmick, however, is the website that allows visitors to "Peanutize" themselves. It takes a bit of skill to get it right; I had far better results when my younger sister, a talented artist, took charge of the rendering. If you'd like to give it a shot, check it out here.

Concord Records, recognizing the value of such a clever marketing tool, has created a similar site that allows visitors to apply Guaraldi's signature mustache to themselves (or anybody else). It's quite a hoot, although you need just the right photo, taken at the proper angle, for the effect to work properly. So go ahead: Give yourself a Guaraldi 'stache!

I love corresponding with fellow Guaraldi fans; aside from the enjoyment that springs from sharing our mutual enthusiasm, such exchanges can be fun and enlightening. A recent note from a helpful fellow named Jim called my attention to an interesting fact: Whether by accident or design, the release of jazz pianist David Benoit's new album, Believe, makes it possible to assemble a complete Benoit cover of Guaraldi's Charlie Brown Christmas soundtrack album. Jim even provided a handy guide for doing so:

"Interestingly," Jim notes, "this set flows nicely, even though the songs were recorded over the course of 32 years. I had to adjust the volume on some tunes to keep it consistent, but otherwise it's difficult to discern the vintage of each track."

Many thanks, Jim; I suspect several folks are about to compose a new playlist!

As I mentioned in a previous post, Concord didn't miss the opportunity to celebrate the 50th anniversary of Guaraldi's Charlie Brown Christmas soundtrack; the label tantalized us with a CD anniversary gift pack and three retailer-exclusive LPs on colored vinyl, along with a CD re-release of the album itself. In late November, a Concord publicist asked if I'd be willing to do some radio spots, to help promote all of these goodies, and just chat about Guaraldi in general. Sure, I said; sounds like fun.

Clearly, I should have requested clarification of the word "some."

(Not that it would have changed my answer, but I'd have been spared the sticker-shock.)

It was a scramble, although not quite as frantic as I feared. Most of the spots were on news and talk stations, and therefore only about 5-7 minutes; I usually had time to catch my breath before the next one. I definitely gained additional respect for film actors who get stuffed into a hotel room during a promotional tour, and must endure an entire day of interviews booked at 20-minute intervals.

Some of the DJs and hosts weren't at all prepared, despite Concord having sent along plenty of background information; in those cases, some of the questions and comments were inane. Happily, several of the DJs were quite prepared, one to a degree that I'm certain extended beyond what Concord had provided. I love folks who do their research!

If you're curious, these are two of the better spots:

• KFOR, in Lincoln, Nebraska (in two parts; scroll down to get the links in order)

• Overnight America, which is syndicated to roughly 90 markets

I also did a podcast for American Standard Time.

Finally, I marked the actual anniversary — December 9 — with a live chat on Sacramento's Capital Public Radio, on the public affairs show Insight, hosted by Beth Ruyak. I shared the microphone with jazz pianist and fellow Guaraldi fan Jim Martinez, and former St. Paul's Church Choir member David Willat, who as a young lad was one of the kids singing during the actual Charlie Brown Christmas TV special.

It has been quite a year for Guaraldi; 2016 likely will seem very quiet, by comparison!