Director/producer Lee Mendelson deserves oodles of credit for creating what became the Peanuts television empire; he also had the genius to gather a four-man team that included Charles M. Schulz, Bill Melendez and Vince Guaraldi. Everything started with Schulz, of course, who scripted the early 30-minute specials that featured his characters. Melendez and his crew animated Charlie Brown and the gang; Guaraldi and his fellow musicians supplied the swing in everybody's step. Mendelson officially served as director and producer.

And, on a few occasions, he turned into a songwriter.

The most famous example, and the tale oft-told by Mendelson himself, refers to A Charlie Brown Christmas and the song it made famous: "Christmas Time Is Here."

To quote a brief passage from my book: 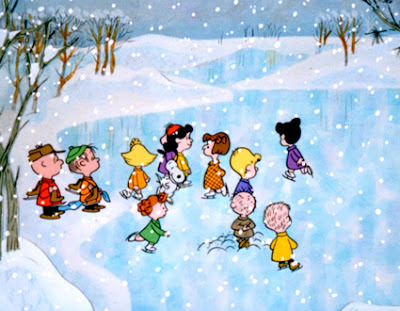 As late summer [1965] segued to early autumn, the Peanuts Christmas special was coming together; a rough cut, set to Guaraldi's music, opened on Charlie Brown and his friends skating on a frozen pond, as snowflakes gently flurried about them. But although Mendelson liked the music employed behind the action — Guaraldi's "Christmas Time Is Here" — he felt the scene lacked something.

"The opening song was an instrumental," Mendelson recalled. "I felt we should get some lyrics, and some voices. We couldn't find anybody to write the lyrics, and I called all my Hollywood friends who were songwriters. But nobody took the assignment, so I sat down, and in about 10 minutes wrote the words to 'Christmas Time Is Here' on an envelope.

"I sure wish I still had that envelope!"

Ask folks to cite Peanuts songs that include lyrics, and you'll get a very short list: "Christmas Time Is Here," "Joe Cool" and "Little Birdie." Guaraldi himself wrote the words for the latter two. But Peanuts fans with very good memories can add another song: the title theme to You're in Love Charlie Brown, the fourth Peanuts special, which debuted June 12, 1967. The show's title theme, a lyrical, slightly woeful waltz, reflects Charlie Brown's hopeless yearning for the never-seen Little Red-Haired Girl. 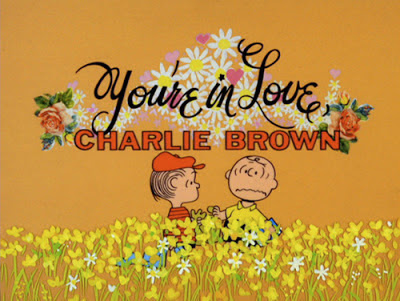 Mendelson, no doubt encouraged by the success he'd had with "Christmas Time Is Here," penned some brief lyrics for this title theme, which are heard as the show's credits appear:

At least ... I thought they were brief.

Well, in fairness, that's all we ever heard. That's all anybody ever knew about.

But that's not all Mendelson wrote.

Guaraldi's tune continues far longer than those six lines; it therefore stands to reason that Mendelson might have written lyrics for the entire composition, although I doubt anybody ever made that assumption. Thanks to some digging at the U.S. Library of Congress, and a related search of the U.S. Copyright Office, the full story — or, rather, the full song — has come to light.

(Truly, I love this sort of discovery!)

Herewith, then, Lee Mendelson's full lyrics to "You're in Love, Charlie Brown," accompanied by one of the actual manuscript pages that was filed with the Copyright Office. Note the twin bylines: "V. Guaraldi + L. Mendelson." Note also the hilarious doodle of — I'm guessing — Charlie Brown's head! 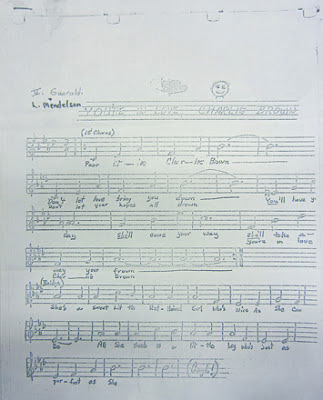 Poor little Charlie Brown,
Don't let love bring you down.
You'll have your day,
She'll come your way;
She'll take away your frown.

Poor little Charlie Brown,
Don't let your hopes all drown.
You'll have your day,
She'll come your way;
You're in love, Charlie Brown.

She's a sweet Little Red-Haired Girl,
Who's nice as she can be.
All she needs is a little boy
Who's just as perfect as she.

Poor little Charlie Brown,
Always ends up a clown.
Who would love you?
No one! That's who!
Why don't you just leave town.

Poor little Charlie Brown,
No one could love that frown.
Who would love you?
No one! That's who!
Your face is too darned round.

Ouch! Those two final choruses are killers, aren't they?

Perhaps that's why we never got to hear them in the show...

One last little oddity: Various DVDs of this Peanuts special include the six brief lines as indicated above. The English audio soundtrack included with the Warners 1960s collection DVD, however (and rather strangely!), features a different sixth line: You're in love, Charlie Brown ... which you'll note is the final line of the second stanza. It's therefore possible that at least the entire second stanza was recorded during production, but then left unused.

Catholic San Francisco runs an occasional feature titled "Cemetery Corner," which marks the 125th anniversary of Holy Cross Catholic Cemetery in Colma, California. The entry in a recent issue (October 19, 2012) is a nice little tribute to Guaraldi, and includes an excellent photo of his grave marker (sharpest photo I've seen of it, in fact). Check it out here.
Posted by Derrick Bang at 2:35 PM 1 comment: 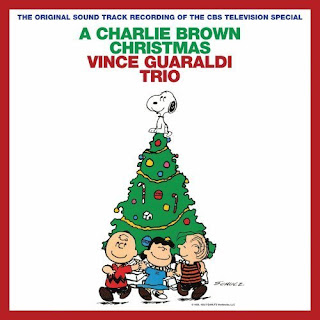 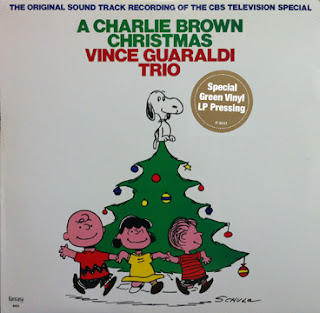 As a reminder to Northern California Guaraldi fans, I'll be joining pianist and recording star David Benoit at Santa Rosa's Charles M. Schulz Museum at 4 p.m. Saturday, November 3. David and I will present a musical and descriptive journey through Guaraldi's life and career, stopping at numerous tuneful highlights along the way. This event will be included with the price of museum admission, and it will be followed by a light reception. Check out the museum's web calendar for additional details.
Posted by Derrick Bang at 1:00 AM 9 comments: