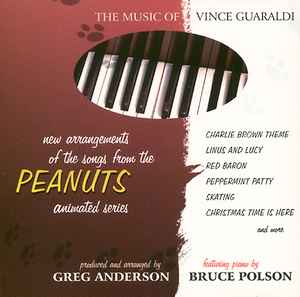 Following up on my January 24 post, I issued an open request for help in creating a list of jazz artists who've recorded a) original tribute compositions honoring Guaraldi; and b) covers of Guaraldi compositions other than "Cast Your Fate to the Wind" and the Charlie Brown Christmas quartet ("Linus and Lucy," "My Little Drum," "Christmas Is Coming" and "Christmas Time Is Here"). I also asked that David Benoit and George Winston not be included, since both are well known for having released several full albums of Guaraldi covers. (In other words, they're too obvious!)
The response was quite helpful. Scott, Chad and Ryo each supplied several suggestions; I also got more creative with Web searches, thanks to iTunes, Spotify and discogs. Then there's Paul, who was inspired by my post to establish a dynamic Wikipedia database that does include the five popular tunes I left out above. (Obviously, he has far too much free time on his hands!) He and I also have been trading information.
My result follows, and — given that new covers are apt to pop up every year — I imagine this list will grow, with time. Listenable versions of most entries can be found somewhere on the Web, but others are quite obscure.
Let me begin by citing full (or partial) tribute albums, a few of which are repeats from my earlier post. French horn player Aaron Brask's 2010 album, The Guaraldi Sessions, has 20 covers. (I've not included his efforts in the following list; just buy the album!) Jazz pianist Terry Disley and his quartet cover five tunes on their 2011 album, Brubeck vs. Guaraldi. Former Guaraldi drummer Jerry Granelli has three covers on his 2020 album, Plays Vince Guaraldi and Mose Allison.
Newer discoveries include the Ku Il Oh Quartet's 2011 album, Holiday Songs Volume One, which — despite its somewhat misleading title — actually is entirely devoted to Guaraldi covers and fresh arrangements of material from A Charlie Brown Christmas. And speaking of misleading, the quartet known as Jake — Tony Mason, piano; Steve Rashid, horn; Gregg Emery, bass; and Hugh Barlow, drums — released a 1984 LP titled A Tribute to Evans & Guaraldi, but only two of its 10 tracks are Guaraldi tunes. On the other hand, pianist Bruce Polson's 1997 album, The Music of Vince Guaraldi, does justice to an even dozen of Vince's songs. (I have included those in the list below, because you'll never find the album; it's woefully out of print.)
One final caveat: I make no comments regarding quality here. Some of these tracks are sensational; some are ... well, not such a much. Most fall somewhere in between. Accept this as the thrill of discovery.
So let's move on, starting with new compositions that pay tribute to Vince:

My lengthy dive into the San Francisco Chronicle archives has concluded.
It certainly was worthwhile.
Although I didn't find any other articles worth quoting in full or part, as with this Ralph Gleason column, the raw data was substantial. My Guaraldi timeline is considerably richer and more precise, particularly during the late 1950s and most of the '60s. Numerous club gigs have been added; many others have been fine-tuned.
You'll also find lots of new photos, newspaper display ads, club matchbook covers and other ephemera.
Aside from the enhanced information about Guaraldi, the Chronicle helped me nail down (in most cases) precisely when San Francisco's significant jazz clubs opened and closed. Since that information now is so much more complete, I've enhanced such entries in red; they're now much easier to find. After all, Guaraldi's career (for the most part) neatly paralleled the rise and fall of the greater San Francisco area's jazz scene.
The hunt is never over, of course. My next challenge is to identify more venues and cities during the tours Guaraldi took outside of California: from the early trips with Cal Tjader, to the 1964 tour with Benny Goodman, to the "Eastern tour" Guaraldi's trio took in the summer of 1965 (which was, I believe, the last time he toured outside the West Coast).
Research is like housework (but much more fun) ... there's always another corner to investigate!
Posted by Derrick Bang at 11:27 AM No comments: 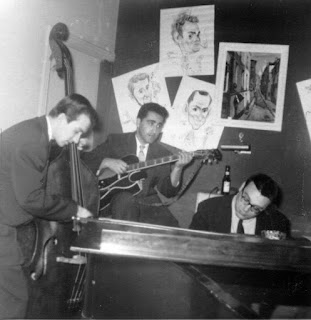 Damn, we just lost another one: the final member of Guaraldi's original trio.
Dean left us a week ago Tuesday, March 9, at the youthful age of 94: the same age as Eddie Duran, who we lost back in November 2019. And, like Eddie, Dean kept performing almost to the very end. Unlike Eddie, who had only a guitar to keep track of, Dean was famous for lugging his massive double bass from car to stage (and back again, at the end of a gig).
They met in the early 1950s, because Dean "stalked" Eddie.
"I saw a guy with a guitar case going into an apartment across the street," Dean told me, during one of our many chats in 2010, "and I waited for him, and introduced myself. And it went from there."
Eddie, in turn, introduced Dean to Vince; the friendship blossomed to include all three. Their casual "garage band" sessions turned serious with an offer from Enrico Banducci in 1954.
"I was jamming with Eddie," Dean explained, "and somehow Vince got word that we could have a job at the hungry i, so we got together for that purpose."
The gig was all-consuming: six nights a week — Mondays were dark — and somewhat unscheduled, because of the club's intriguing layout and arrangements. "Name" acts — the Mort Sahls and Kingston Trios — were booked into the main showroom. It was separate and enclosed, with ticketed, theater-style seating and waiters who circulated and took drink orders. Guaraldi's trio played in the amusingly named "Other Room," actually the rear postion of an extended foyer/lounge area.
"We lived close by, but we drove separately," Dean continued, describing a typical evening. "It was a lot easier to park in those days. We'd start playing at 9 p.m. and continue until 1 a.m. The Other Room was where people lined up to go into the showroom. There were some bar stools, but people mostly stood in line, waiting for the show to begin; we played for their enjoyment, and to put them at ease. 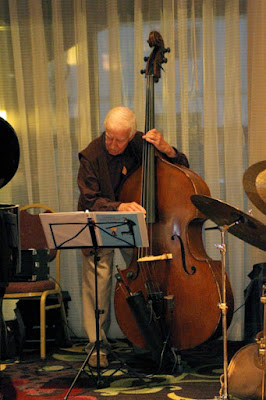 "We were the frosting on the cake. We were on our own; we played what we felt like playing, when we felt like playing it. It was unbelievable, to be so loose. We'd call tunes among ourselves: standards, blues. We didn't have arrangements at first; the arrangements — key changes, that kind of thing — grew out of tunes we'd repeat over time."
This first "classic" Guaraldi Trio co-starred on Vince's first two Fantasy albums: The Vince Guaraldi Trio and A  Flower Is a Lovesome Thing. There was no drummer; as with the Nat King Cole Trio, the set-up was piano, guitar and bass. Dean easily "covered" for the absent drummer.
As you'll read in this lovely San Francisco Chronicle obit, Dean went on to perform alongside just about everybody you could think of.
As mentioned in my post on Eddie, linked above, my fondest personal memory of Dean came early in the summer of 2012. The Gods smiled upon me; I was able to hire him, Eddie, drummer Colin Bailey and pianist Jim Martinez for a performance at that year’s Beaglefest (an annual convention for fans of Charles M. Schulz and Peanuts). It was a fabulous reunion and blending of Guaraldi's two early trios: an evening of magic.
Godspeed, Dean. Heaven's massive jazz band just got a lot more swing.
Posted by Derrick Bang at 1:06 PM No comments:

I've been in the research tank for the past month, thanks to the San Francisco Chronicle finally being available as a searchable online archive. That option didn't exist for most newspapers when I gathered information for my Guaraldi biography, back in 2008 through 2011. Since then, just about every newspaper — large and small — has been granted that sort of Internet presence. Some are free to the general public; some are free when accessed via libraries (particularly university libraries); some are locked behind the paywalls at newsbank.com or newspapers.com. 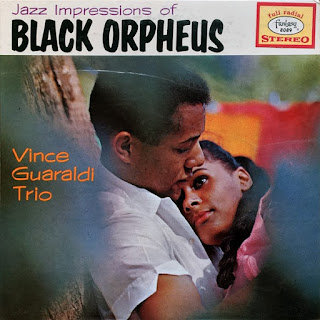 During the past decade, as the archives of newspapers of particular importance to Guaraldi's career became available — the San Francisco Examiner, the Oakland Tribune, the Los Angeles Times and the San Mateo Times, among others — I added club performance details and other bits of information to my Guaraldi timeline. Sometimes a particularly juicy nugget prompted an entry in this blog.
But, maddeningly, the Chronicle — the most important source of Guaraldiana — failed to enter the 21st century.
Until quite recently.
"Giddy" is a good description of how I felt, upon discovery and subsequent exploration. When the dust had settled, after several weeks, I had downloaded more than 250 PDF newspaper pages. Most contained hitherto unknown information; many amplified — and even corrected — existing data that was either incomplete, or totally wrong. As a result, the Guaraldi timeline has been enhanced significantly, and it will continue to expand as I work my way through all the data.
However, this particular Ralph Gleason column deserves a showcase all its own.
This was published on July 5, 1962. Bear in mind, that was not quite three months after the release of Jazz Impressions of Black Orpheus; and two months before fellow Chronicle columnist Hal Schaefer reported, on September 15, that Guaraldi had become "the first West Coast jazz pianist to sell over 50,000 albums in less than five weeks."
Gleason's column is noteworthy both for its prescience, and for the unxpected "confession" he makes in the third paragraph, and for the fact that "Cast Your Fate to the Wind" is not mentioned.
Enjoy!
********
The question in local jazz circles, these days, is "Will success spoil Vince Guaraldi?"
The diminutive Italian leprechaun seems to have a hit on his hands, with his new Fantasy LP, Jazz Impressions of Black Orpheus (Fantasy 3337). Already there is action throughout the country; in some areas, such as Los Angeles and San Francisco, it has "taken off," as the trade describes it.
When Vince asked if I would write the notes for the LP, I was a bit hesitant because, although I had dug the Guaraldi treatment of the Orpheus music when I had heard him play it in the clubs, I had not always dug the Guaraldi trio. So when I had a chance to listen to the tapes, I was delightfully surprised. They were a gas, not only for the Orpheus music, but also for the originals by Vince, and for the great version of "Since I Fell for You."
Some albums have "hit" written on them, or so you think when you first hear it. Vince's LP made that impression on me, and I am delighted to find that it is coming true. A single from the album has been widely played on the air, and might even take off on its own.
Offers for the trio's services are coming in now, though Vince still has bitter memories of last Christmas, when he was out of work. His may be the latest in the line of San Francisco groups to break through the sound barrier and become a commercial jazz property. Along with the money that this brings, there are lots of pressures, so the question, "Will success spoil Vince Guaraldi?", is not as idle as it might sound.
Vince, however, treats it with his characteristic flippancy.
"Of course it will," he says, "but I'll have plenty of company."
Posted by Derrick Bang at 10:33 AM No comments: