A heaping helping of Vince 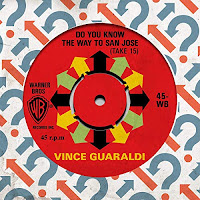 It's worth mentioning that Amazon, iTunes and Google Play have made just about all of Guaraldi’s catalogue (as leader) available for streaming and purchase as digital downloads.

And I mean everything:

• The initial and much later releases on the resurrected D&D label: Vince Guaraldi and the San Francisco Boys Chorus, Oaxaca, etc.

• Most important, from the standpoint of hard-to-get material, is everything released by Vince’s son, David: Live on the Air, North Beach, both of the Peanuts Lost Cues albums, and so forth. Some of those have become quite difficult to find in CD format.

This list even includes a “digital single” of Guaraldi’s cover of “Do You Know the Way to San Jose,” featured as a bonus track within Omnivore’s anthology set of his three Warners albums. And, as you can see above, somebody even took the trouble to produce a faux 45 disc and sleeve. (I assure you: It doesn’t exist in real life.)

Oddly, though, the list does not include “The Sharecropper’s Daughter” or “Oh, Happy Day,” the other bonus tracks from the Omnivore set.

And this is important: I checked with ace sound and re-mastering engineer Michael Graves, and he assures me that these streaming versions of Oh, Good Grief, The Eclectic Vince Guaraldi and Alma-Ville are, respectively, from the Warner Bros. and Wounded Bird CDs … not the Omnivore package he worked on.

The only album missing from the list is the soundtrack to 1969’s big-screen movie, A Boy Named Charlie Brown, released on CD by Kritzerland in 2017.

This is a great chance to “fill in the gaps,” for folks who don’t mind not having physical copies. But I advise acting quickly: Digital services sometimes taketh away just as rapidly as they giveth!
Posted by Derrick Bang at 7:58 AM