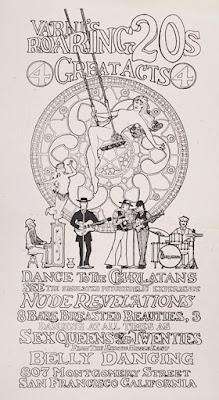 With that line-up, the Charlatans achieved considerable local fame during the next few years, playing every significant Bay Area club, alongside name acts such as the Grateful Dead, Jefferson Airplane and Quicksilver Messenger Service.

In March and April 1967 — for reasons likely having less to do with business savvy, and more to do with mind-altering substances — the Charlatans spent six weeks as the house band at a strip club in San Francisco’s North Beach area.

Varni’s Roaring Twenties, at 807 Montgomery Street, began as an attractive club catering to tourists, and fashioned in the manner its name suggested: plenty of dark wood paneling and velvet, a huge bar, Tiffany-style chandeliers, stained-glass windows and much more. Initially, the performance action was tame, and the place was mainstream-friendly.

By the mid-1960s, Varni’s had achieved notoriety after becoming a strip club with a highlighted act: a young woman who’d rise from the floor every half hour, clad in nothing but a smile, and then swing above the patrons. She was the scandalous “girl on a swing,” memorialized on the club’s matchbook covers. 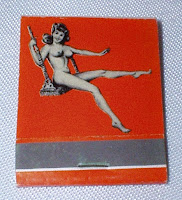 The place was often in trouble with the law. As reported by the Santa Cruz Sentinel on September 29, 1965, an attempt to revive dime-a-dance flappers — an activity supposedly banned under an ordinance dating back to the 1920s — ended after a threat to revoke the club’s dance permit. (Club owner Bill Varni unsuccessfully argued that “dancing was recommended by the President’s Health Commission.”)

Varni’s was by no means the sort of hippie-laden, rock-club venue the Charlatans were accustomed to playing, but — it must be said — their look was a perfect fit for the atmosphere. (One has to wonder, though, what the band thought of having to play “Sweet Lorraine” every time the swing and its naked occupant appeared.)

I’ll quote Marks’ article directly, in this next paragraph:

“[Varni’s] was also right around the corner from the Playboy Club,” Wilhelm says, of Hugh Hefner’s San Francisco outpost, “where Vince Guaraldi was playing. He wandered into Varni’s one night, I guess on his break. He noticed we had an electric piano that was an actual piano with magnetic pickups in it, like on an electric guitar. He liked the sound of that instrument and asked if he could sit in. We went, ‘Vince Guaraldi? Sure, come on, man.’ So he would come over on his breaks and play with us.”

San Francisco’s Playboy Club was indeed nearby, at 736 Montgomery — the corner of Montgomery and Jackson — and certainly within easy walking distance. It opened on November 13, 1965, and lasted just over a decade before closing on July 10, 1976. And while it’s certainly possible that Guaraldi performed alongside the iconic bunnies, I’ve no proof: no ads, no newspaper club listings. That’s not necessarily a problem; the Playboy Club booked major headliners, who were granted the display ad and listings coverage. Guaraldi’s combo likely would have been relegated to an inner cocktail lounge section, rather than the main stage.

Opinions differ as to why the Charlatans lost their gig at Varni’s; Marks’ article has the droll details.

Numerous personnel changes took place during the next two years. When the band recorded its one and only album in 1969 on the Philips label — simply titled The Charlatans — the performers were Wilhelm (guitar), Olsen (bass and vocals), Darrell DeVore (piano/keyboards/vocals) and Terry Wilson (drums). And that was pretty much the band’s final gig.

A 1996 complication album, The Amazing Charlatans, revived material that had been recorded between 1965 and ’68. Various former members reunited sporadically for reunion gigs between 1997 and 2015.

As for Varni’s Roaring Twenties, the Fremont Argus — on December 27, 1968 — reported that the club lost its liquor license after agreeing to charges that included topless dancers performing on tables and the bar, and “lewd male-female dances” on stage. License revocation was stayed for six months, to allow the owners to sell the establishment.

Those curious enough to investigate can get excellent “before and after” glimpses of Varni’s in two mainstream movies. The venue gets plenty of exposure in 1962’s Experiment in Terror, which finds bank teller Kelly Sherwood (Lee Remick) terrorized by a maniac (Ross Martin) who threatens to kill her younger sister (Stefanie Powers) unless she steals $100,000 from her cash drawer, on his behalf. Kelly immediately contacts the FBI, and is placed under the calm and methodical guidance of Agent Ripley (Glenn Ford).

Well into the story’s second act, Kelly’s tormentor orders her to meet him in a night club, which turns out to be Varni’s. The sequence is lengthy; as FBI agents clandestinely surveil her, Kelly parks in a gas station adjacent to the club, walks past its stained-glass windows and enters the bustling establishment, then waits to be contacted by the maniac she’s never seen. The “ladies on swings” — shown during an establishing shot — are fully clad in frilly Roaring ’20s fashion.

Archie seeks a second opinion from a fellow doctor (Arthur Hill, as Barney); he suggests meeting for lunch at a “sophisticated” topless club that turns out to be Varni’s. Plenty of flesh is on display as Archie enters and walks past the bar; he and Barney eat and chat as the famed “girl on a swing” — her back to the camera — sways back and forth.

Varni’s didn’t last much longer, after filming concluded. But the action wasn’t quite over at 807 Montgomery. The Orphanage opened at that address in the early 1970s — the earliest concert listing I’ve found was for Bittersweet, which headlined May 22-23, 1972 — and quickly became a hot North Beach rock and (occasionally) jazz venue. The magic didn’t last long; this club closed in 1976 … but not before Guaraldi had appeared there on December 8, 1975, on a jazz-laden bill that included Cal Tjader, Jon Hendricks and John Handy.

The venue’s exterior made a fleeting TV appearance during the first season of The Streets of San Francisco: in the second episode, “First Day of Forever,” broadcast September 30, 1972. Shortly after the title credits, guest star Janice Rule — playing a classy hooker — exits a nightclub, having been abandoned by her potential mark, and walks down a darkened street (foolish soul!) and past The Orphanage’s brightly illuminated sign.

That’s the end of this story … but wouldn’t it be nice if somebody, somewhere, snapped — and saved — a photo of Guaraldi jamming with the Charlatans, surrounded by cavorting topless dancers?
Posted by Derrick Bang at 1:56 PM