Champlin at the bit


Corry, one of my many colleagues (co-conspirators?) in the realm of meticulous fact-finding, recently forwarded what he hoped might be a helpful tidbit of information. Corry focuses on the greater San Francisco rock 'n' roll scene, with a particular emphasis on the activities of Jerry Garcia and the Grateful Dead. You'll lose happy hours (days? weeks?) at Corry's blog, Lost Live Dead, and I recommend it highly. He shares my passion for attempting the impossible: Just as I hope to eventually nail down every club, concert and studio date Guaraldi ever had, Corry hopes to do the same with Garcia and the Dead. 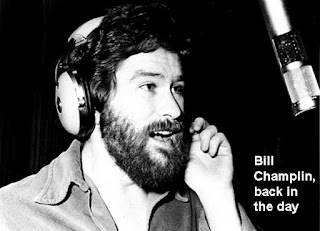 So, while pursuing a lead involving Garcia's possible participation with the Sons of Champlin in August 1969, Corry came across a brief quote from Bill Champlin, who once had been asked about this very possibility. As it turned out, Champlin didn't remember Garcia sitting in during the performance in question, but then he (Champlin) added an additional comment, which is what Corry passed along to me:


I jammed with Jerry's band with Bill Vitt and John Khan at the Matrix once, with Vince Guaraldi.


Now, that was tantalizing. Readers of this blog know that I'm always after fresh evidence of "Vince and Jerry" collaborations, particularly at the Matrix. (See the May 11, 2012, blog entry.) My Guaraldi timeline already included quite a few of his verified appearances at the Matrix, and it's known that he and Garcia occasionally played together at that club, particularly during the regular "Monday jams" that took place for a few years. But I didn't have any listings that found Guaraldi alongside Garcia, Bill Vitt, John Khan and Bill Champlin. Clearly, this bore further investigation.


Happily, Champlin was easy to reach, and he responded quickly:


I couldn't remember a date of that jam, but I'll try to recall the stuff for you. Bill Vitt called and asked me to come play rhythm guitar, because Jerry was so busy fooling around with some kind of effects unit, very cool but not kickin'. So, being a friend of Bills', I brought a guitar and amp and set up. I didn't know that Vince was gonna play 'til I got there. Cool stuff for me; I'd been a fan since the red plastic Fantasy album with "Cast Your Fate to the Wind" on it. Anyway, we played, and it was very cool. Vince was way cool. Damn, what a great musician. At one point I was looking down, and suddenly I heard this beautiful soprano sax wafting across the band; I looked up, and there was Vince Denham playing, beautifully as always, after having just played with Don Ellis at Fillmore West. I found out that he and Vince had hit it off. Curley Cooke came up and jammed on my Gibson for awhile also, and then the night was over and I went home. Looking back, it was a rare night, but back then it was never a surprise to find great players coming together, even in spite of themselves and their careers.


That's all I remember, but between then and now there's been a lotta water under the bridge, and I could very easily have lost a few details of the night. I'm writing to you from backstage in Osaka, Japan, which means that I'm still out there makin' noise, so I look back on those rare jams with a lot of respect for the players. Vince Guaraldi was one of the big ones for me. Anyway, there it is. Be good, Bill.


Ellis and his band were at Fillmore West June 18-21, 1970; the magnificent double-LP set Don Ellis at Fillmore was recorded during those four memorable evenings. Now, Vince Denham wasn't yet an official member of Ellis' band — he joined a bit later, with the 1972 release of Connection — but Denham certainly could have been "hanging around" during one or more of those Fillmore sets.


After sharing this newest data with Corry, he cross-matched with some additional details:


The Grateful Dead played the Pauley Ballroom in Berkeley on Sunday, June 21, 1970 (two nights after Memphis, and three days before New York). Jerry Garcia and Howard Wales were booked for the Matrix on Monday, June 22, so that fits Champlin's timeline. It sounds like Howard Wales was booked, but Guaraldi actually played the gig.


I [also] know a lot about the Don Ellis Orchestra. Among many other things, it was sort of a session man's side project, so Vince Denham and every other working jazz musician would have had numerous friends in the Ellis band — there were 23 guys in it; Denham had to have known somebody — so whether he jammed or not, Denham must have been at Fillmore West to hang out. 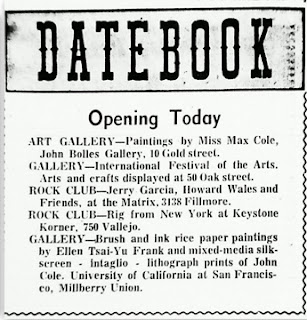 And, just for good measure, Corry forwarded a clipping that ran in the entertainment section of the San Francisco Chronicle on Monday, June 22, 1970 (on Page 44, if you insist on full disclosure). You can see that at right.


So, there we have it: Thanks to Bill Champlin, I'm satisfied that we can identify June 22, 1970 — a date which, until this moment, had remained empty on my Guaraldi timeline — as the memorable evening that featured Guaraldi, Garcia, Vitt, Champlin, Khan, Cooke and Denham.


If all this seems like a lot of effort just to nail a single gig out of so many, well ... yes, of course it is! But that's the name of the game. I want to have the world's most accurate and informative timeline of Guaraldi's activities, and such a goal requires this level of dedication and perseverance.


Besides: If Corry and I — and other tireless investigators like us — don't do this stuff, who else will?

The correct spelling is Curley Cooke, I am about 99% sure. I have just contacted him to see if he has anything to add.

I asked him a few years ago if he ever played live with Wales and Garcia at the Matrix, since he is known most directly in Garcia circles for appearing on Hooteroll?. He said "no". I got the sense he didn't recall ever having played live with Garcia. So if we are angling for the minutia I'd say that Garcia and Cooke were not onstage together.

I also know that Garcia was in Larkspur in the early evening, giving an interview for Hard Road magazine. Probably doesn't matter -- he probably had plenty of time to get into the city -- but just for the record.

Correct spelling so noted, and thanks for the catch. Sad news about Cooke; I hate to hear such things, since it means forever losing a potential source. Sounds like June 22 was a busy evening for Garcia, but not impossibly so; as you say, he had plenty of time to reach the club, and those jam sessions always ran into the wee hours.

Another point to consider with respect to Cooke was that the Monday night Matrix scene was just a jam. By the time Bill Champlin gave up his guitar to Curley Cooke, Harvey Mandel might have already replaced Garcia, or any number of unimaginable alternatives.

Interesting also for the fact that Garcia was about to embark on the Festival Express tour across Canada which helps bookend his whereabouts in late June '70.

Just tripped on this while doing an internet search on Vince Denham to jog my timeline memory from my many years as the sound man at The Great American Music Hall.

Vince Denham was an original member of the jazz big band that played that club every Monday night from near the end of 1972 through late 1974 at least.

Vince was in the saxophone section until he left, not to play with Don Ellis but to move, I'm pretty sure, to Las Vegas.