The score, the whole score, and nothing but the score...

Sharp-eared Guaraldi fans love to analyze every single note heard in A Charlie Brown Christmas, in part because that’s the only Peanuts TV special to have generated its own soundtrack album. Many times over the years, I’ve fielded this question: “What’s being played about seven minutes into the show, as Charlie Brown watches Snoopy decorate his doghouse? That music isn’t on the album!” Answer: “Air Music,” also known as “Surfin’ Snoopy” ... and while it’s true that tune doesn’t appear on the soundtrack album, it is included on the CD Charlie Brown’s Holiday Hits.

For quite awhile, my interest is this particular topic was confined solely to such easy album/soundtrack comparisons. But when what we can call the “sidemen controversy” erupted anew late last year — regarding which of Guaraldi’s bassists and drummers performed on the special’s TV soundtrack, and/or the subsequent album, as detailed at length in this blog’s previous post — I realized that Fantasy’s long-standing justification for the credits, as given since the album’s re-release in 1998, required further scrutiny.

But can this theory be supported by the evidence?

At least, not completely.

I now hand the keyboard to my good friend and fellow Guaraldi enthusiast Doug Anderson, who painstakingly compared every note of the TV special and album. He can best explain how he proceeded.

My general, Mac-based algorithm — whoops, I've just alienated the Microsoft portion of our readership! — was as follows:

I first ripped the audio from the TV special (sourced from a DVD) to a single, monophonic MP3 file, which I listened through carefully to generate a second-by-second list of all the musical cues and their timing. (This list also allowed me to quickly identify which LP songs were not used in the film soundtrack.)

Then I used Audacity audio editing software to: open the complete soundtrack audio; extract the soundtrack portions containing individual musical cues; and save each as an individual MP3 file. That produced the TV audio files used for comparison.

Turning to the LP perfomances, sourced from the commercial CD: I used iTunes to "fold down" the album tracks to monophonic LP audio files, which were used for comparison purposes.

I then used Garage Band (multitrack recording software) and a good pair of studio monitor headphones to perform the audio comparison, opening a mono LP performance file in one audio track, and adjusting the balance so that it played predominantly in the left channel. I then opened the TV audio file in a separate audio track, and adjusted it to play predominantly in the right channel.

What followed was a lot of comparison, trial and error: moving the TV cue back and forth, to determine if the TV audio on the right could be matched up with the LP audio on the left. A succesful "match" resulted in a spacious, pseudo-stereo image across the left and right channels (like "Duophonic" LPs from the 1960s). Proving a negative generally was easier than confirming a match — especially where it involved different notes, such as in varying improvisational riffs, rather than just slightly different phrasing — and usually required closely comparing the TV cue with every portion of an LP performance where a particular musical phrase was repeated.

We must note an important aspect of the recordings: Originally captured on analog reel-to-reel tape, and making their way to us via multiple generations of copies — with inevitable, slight variances in speed — the LP and TV performances simply won’t stay locked in perfect sync indefinitely. In the case of a given clip, such as “Skating,” you can hear it slowly morph from a "Duophonic" image, to a reverb-like delay, to an out-of-sync syncopation. Even so, the performed note content is demonstrably the same ... and, more tellingly, quite different from the cacophony that results from trying to line up different performances. 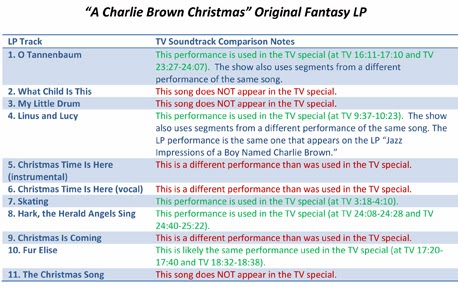 The results of Doug’s arduous work, for which I’ll be eternally grateful, are shown (in part) above. You’ll want to click here, though, to view the entire chart.

Several surprises emerge, starting with the striking fact that some of the cues — such as “Skating” and “O Tannenbaum” — are identical on album and film score. That means only one set of sidemen performed those numbers. On the other hand, some cues — notably “Christmas Time Is Here” and “Linus and Lucy” — are, indeed, different on album and film score. 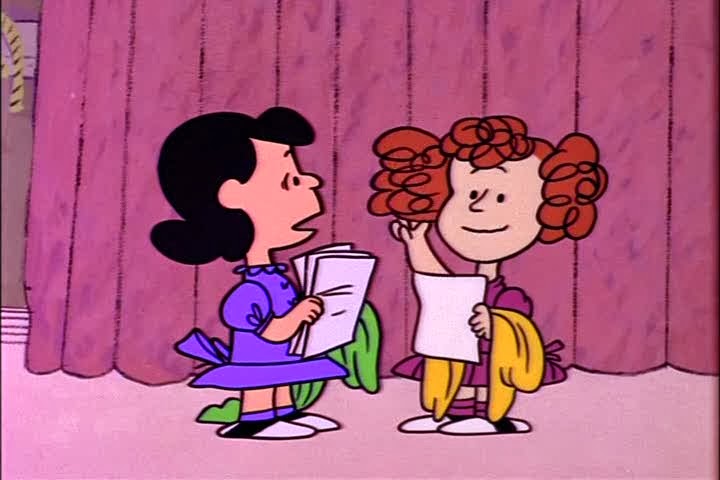 But that’s not all. You’ll also note that several of the film cues — such as “Charlie Brown Theme” and “Frieda (with the Naturally Curly Hair)” — originate on Guaraldi’s previous album of Peanuts music, Jazz Impressions of A Boy Named Charlie Brown. That’s not unusual from an artistic standpoint; it makes sense that director/producer Lee Mendelson and animator Bill Melendez would have drawn from Guaraldi’s earlier Peanuts themes, if they felt a particular scene demanded a certain musical accompaniment.

But it does further muddy the water, with respect to which sidemen should be credited for the Charlie Brown Christmas score cues. And all of this information, taken as a whole, also makes it even harder to decide who should be credited on both of Fantasy’s Peanuts albums (as detailed at greater length in the aforementioned previous post).

That aside, Doug has delivered a marvelous bit of detective work, which absolutely nails down every single bit of music in the TV special.

Did he have the same success, applying his methods to Jazz Impressions of A Boy Named Charlie Brown, and the never-aired documentary from which that music derived?

Thanks so much for the kind words. It was a lot of work, but I enjoyed doing it. And for all the realizations and discoveries that resulted from it, the ones that impressed me most were perhaps the most obvious: I hadn't really focused on the fact that "What Child is This" and "My Little Drum" aren't in the TV special at all! They were so familiar from the LP, back in the pre-VCR days when the special was only viewable once a year on network TV, that those songs had insinuated themselves into my memories of the animated show, even though there's not a direct connection.