It's a frequent trivia question, and one that many otherwise reputable reference books get wrong:

Few people realize, however, that Guaraldi also had a hand in three more animated Peanuts projects.

Guaraldi's untimely passing in February 1976 left Lee Mendelson in an obvious bind, when it came time to score the next Peanuts TV special, It's Your First Kiss, Charlie Brown. Perhaps after considerable soul-searching, Mendelson shifted from jazz to a more pop-oriented sound, teaming former psychedelic rocker Ed Bogas with singer/songwriter Judy Munson. That likely was a shrewd decision; rather than have somebody else try to imitate Guaraldi's distinctive Peanuts sound — which clearly would have been impossible, and perhaps even unwise — Mendelson went in an entirely different direction. Successive Peanuts TV specials remained in that pop realm for the next dozen years.

At the same time, though — shortly after Guaraldi's death — when Charlie Brown and his friends accepted a few outside "moonlighting" assignments, Mendelson instead returned to his Main Man ... which is how Vince scored three Peanuts public-service shorts from the grave.

Well, not exactly ... although it might have seemed that way, to people who weren't paying attention. 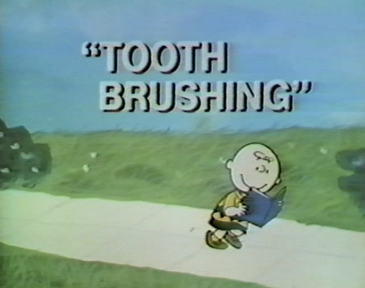 Mendelson, animator Bill Melendez and Charles M. Schulz teamed with the American Dental Association to produce a pair of 5-minute shorts: 1977's Tooth Brushing and 1980's It's Dental Flossophy, Charlie Brown. Both films were designed to be shown in schools, as a means of encouraging children (and their parents) to take better care of their teeth.

Tooth Brushing begins as Charlie Brown happily concludes a visit with his dentist — apparently not having suffered any cavities — and then shares what he learned with Linus and Snoopy. As Charlie Brown explains how to brush and floss properly, we watch both Linus and Snoopy demonstrate these desired techniques. The film draws most of its humor from the fact that Snoopy is using Lucy's tooth brush, which the neighborhood's champion fussbudget fails to realize when she joins the bathroom gathering. As Charlie Brown and Linus react with hilarious expressions of nausea, Lucy uses the same brush to prove that she's the best brusher in town.

The music track behind this action is constant, and consistent: several variations of "The Heartburn Waltz," lifted from the score to Be My Valentine, Charlie Brown, which had debuted January 28, 1975. This engaging theme was heard half a dozen times during the course of that Peanuts TV special, but never quite the same way twice; Guaraldi vamped and noodled through numerous arrangements and Hammond B3 variations, and he also recorded more versions than ultimately were used in the show. Thus, sharp-eared listeners who hang on every note during Tooth Brushing will detect a few versions of "The Heartburn Waltz" that are lifted directly from Be My Valentine, while at least one is an alternate take that never made it into the soundtrack.

Tooth Brushing is available for viewing on YouTube, and you'll find that it's cute and instructive, as well as being a nice showcase for Guaraldi's music.


As the next short's title suggests, Dental Flossophy focuses more on the post-brushing ritual of flossing, with Lucy showing Charlie Brown and Snoopy how to work the floss into every crevice and space between each tooth. As this takes place, Woodstock attempts to build a fresh nest in his favorite tree, with no success; he eventually realizes that dental floss would be ideal nest-building material, and empties an entire roll in delight. Lucy, naturally, is disgusted; as Charlie Brown departs, he warns Snoopy that it's probably best for each person to buy his or her own roll of floss.

Although Mendelson once again re-purposed music from Be My Valentine, Charlie Brown, the score for Dental Flossophy displays more variety. Four distinct tracks fill the (again constant) soundtrack for this second public-service short, starting with a charming underscore cue that Guaraldi dubbed "Never Again." The next track is Cue 17 from Be My Valentine, and I'm honestly not sure of the actual title, because the "use sheet" notations don't correspond well with the actual final score in that particular TV special. (Guaraldi never was very good about keeping track of such details.) Then we hear another version of "Never Again," followed by the familiar "Heartburn Waltz," which brings Dental Flossophy to a close.

As also mentioned in the comment below, this second "toothy" featurette also can be viewed on YouTube. 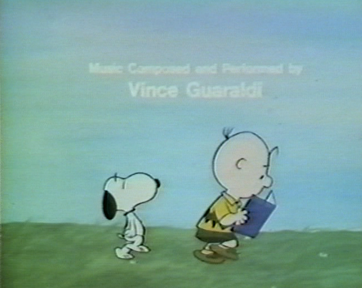 Guaraldi was cited onscreen for both of these American Dental Association shorts, amid extensive end credits that even acknowledged who voiced the various characters.

The third short was significantly different in many respects.

Charlie Brown Clears the Air was made between the two American Dental Association projects, and released in 1979. This one, a collaboration with both the American Lung Association and the fledgling U.S. Environmental Protection Agency — the latter had debuted in 1970, the same year we celebrated the first Earth Day — had a more serious (one might even say strident) tone. Schulz was an ardent environmentalist years before expressing such views was considered "cool"; he had name-checked Silent Spring author Rachel Carlson all the way back in early 1963. Charlie Brown Clears the Air therefore mirrored Schulz's sensibilities, and this short took a firm — if still wryly amusing — stand on several environmental hazards.

Charlie Brown tells Linus how unhappy Snoopy is, because his doghouse has become soot-grimed by the foul smoke wafting from a neighbor who burns his leaves. Trouble is, the world-famous beagle can't really complain, because he's contributing to the problem by failing to properly tune his motorcycle. (It's all the fault of his mechanic, Woodstock.) Later, the entire Peanuts gang takes the field for a baseball game, where Linus misses catching a high fly ball because he trips over all the debris littering the outfield. Another catch is muffed by Lucy, who can't see the ball for the smog ... on top of which, she's coughing so hard that she can't get her glove up anyway. 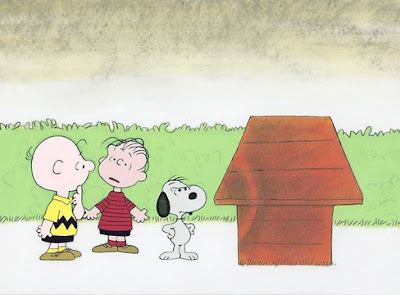 The film concludes with half a dozen strong suggestions for behavior that takes better care of the environment and, by extension, all the children — and dogs and little yellow birds — that inhabit it. It appears that one suggestion — that children should observe and report on obvious "violations" — generated a little controversy; at least one newspaper reported on the possibility that Charlie Brown Clears the Air was encouraging kids to "narc" on their parents!

Rather vexingly, though, Guaraldi is not credited at the end of this short, as you can see when checking it out on YouTube. (One wonders, given the absence of title credits, if he might have been acknowledged at the beginning.)

Although these little films circulated widely during their initial release, they're all but unknown these days, and quite difficult to track down. (VHS tape copies occasionally pop up on eBay.) They're fascinating both as Peanuts animation "sidebars" that even avid fans haven't heard of, let alone seen, and as equally obscure entries in Guaraldi's soundtrack oeuvre ... made without his awareness or direct participation. 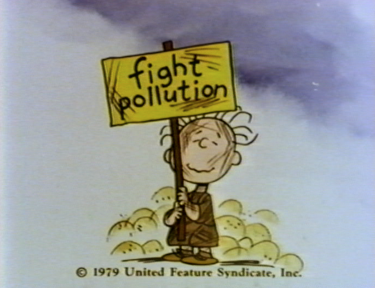 Very eye- (and ear-) opening post! I had seen one of those PSA films on offer on eBay some time back, but didn't bite. It was nice to be able to watch some of those "lost" shorts on YouTube. You can find "Flossophy" at http://www.youtube.com/watch?v=4AwIGgywfSg

Interesting: So those indicate that -- at least as of the late 1970s/early 1980s -- tapes of Guaraldi's soundtrack cues were still in the Mendelson production vaults. Oh, to be able to rifle through those closets!