The respect of one's peers 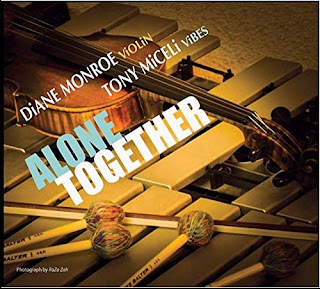 My good friend Scott recently called my attention to the fact that jazz vibraphonist Tony Miceli's 2014 album with violinist Diane Monroe, Alone Together, includes an original track titled "Vince Guaraldi."
"For a lot of people my age," Miceli notes, "[A Charlie Brown Christmas] might have been your first exposure to jazz. [Guaraldi] wrote beautiful melodies, and as my musical taste grew, I began to realize more and more how heavy he was. Thinking of him was a great inspiration for me."
Vexingly, the album isn't available for listening on Spotify or Amazon, but you can watch Miceli deliver a live performance of "Vince Guaraldi" here. The Guaraldi vibe isn't exactly obvious, but I do detect the wistful quality of "Rain, Rain Go Away" and "Great Pumpkin Waltz."
This reminded me that I'd earlier written about the 2016 John Stowell/Michael Zilber Quartet album, Basement Blues, which includes an original composition titled "Have Yourself a Vince Guaraldi Xmas." Again, an obvious nod to Vince's work is hard to detect, although (as I said then) "faint suggestions of 'Christmas Time Is Here' hover throughout." You can investigate that here.
And this got me thinking...
Album tributes to Guaraldi's score for A Charlie Brown Christmas have become ubiquitous; I've most recently tabulated them here. All four of Guaraldi's original compositions from that TV special also have gotten heavy coverage, as has "Cast Your Fate to the Wind," which has become one of the most oft-covered anthems in the jazz pantheon.
But what about all of Guaraldi's other original compositions?
The Dan Dance Trio's 2003 album, Live at the PY, includes a reading of "Ginza Samba," which can be enjoyed here. Brad Myers and Michael Sharfe's 2016 album, Sanguinaria, features a tasty arrangement of "Great Pumpkin Waltz," which you'll find here. How 'Bout Now, a 1993 album by the Portland, Oregon, jazz trio Tall Jazz, features a sensational cover of "Red Baron." You'll have to take my word for that one, because the album is woefully out of print, and nowhere to be found online.
French horn player Aaron Brask led a jazz/string combo that covers a whopping 20 compositions on his 2010 album, The Guaraldi Sessions; samples are listenable here. (The instrumentation is unusual, to say the least, and the album doesn't exactly swing. But it's enjoyable nonetheless.) Northern California jazz pianist Terry Disley and his quartet cover five Guaraldi compositions, including "Treat Street" and "Peppermint Patty," on their 2011 album Brubeck Vs. Guaraldi; check his website for more information. And former Guaraldi drummer Jerry Granelli includes a cover of "Star Song" (along with "Cast Your Fate to the Wind" and "Christmas Time Is Here") on his 2020 album Plays Vince Guaraldi and Mose Allison, as I previously mentioned here.
So ... what else is Out There?
To quote the former (and dearly missed!) Los Angeles-based sci-fi radio talk show Hour 25, I'm calling on the Group Mind for some assistance, in order to compile a definitive — or at least, somewhat longer — list of Guaraldi covers. But there are some ground rules:
• Ignore "Cast Your Fate to the Wind" and the four Charlie Brown Christmas compositions ("Linus and Lucy," "Skating," "Christmas Is Coming" and "Christmas Time Is Here"). We're after the less common stuff.
• Ignore the efforts of Cal Tjader, George Winston and Davis Benoit. They're too easy.
• And while we're at it, are there any other Guaraldi tribute compositions, along the lines of the ones mentioned above by Tony Miceli and the Stowell/Zilber Quartet?
So c'mon, gang. Acknowledgement will be given, and I'll amend this blog entry — or prepare an entirely new one, if warranted — as the information rolls in.
Posted by Derrick Bang at 11:36 AM

About the 2010 Sessions by Aaron Brask, there's different recipes going into the kitchen on this, from what I was able to hear (AllMusic.com). First half there's straight services close to the source: "Red Baron", "Surfin' Snoopy", "Star Song", "Pebble Beach", "Christmastime" that don't harm the turntable, where "Surfin'" is almost a re-performance. Then there's other half, which seems to've been commissioned by King George I: "Linus", "Rain", "You're In Love" and get away from Vince, and send the charts bobbing along the River Thames. Then there's a couple that simply got away, maybe to Herb Alpert's backporch. To me the unlikeliest winner of the set is "Casaba" which gets deeper into a Dr. Funk mood than the maestro himself. "Skating" is a great showcase by Jacksonville Symph for the John Scott Trotter treatment, which is to say, I like the card, man.