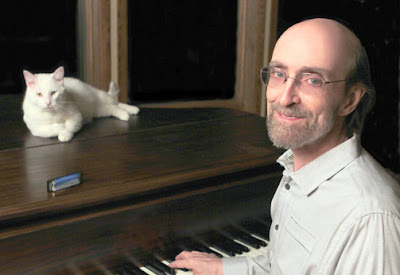 Celebrated solo pianist George Winston, a longtime Guaraldi fan, will devote this weekend's live-streamed concert to compositions from Dr. Funk's catalogue.
It will take place at 7 p.m. (Eastern time) and 4 p.m. (Pacific), on Sunday, February 14.
The performance is in support of Feeding America, and donations can be made here. The concert's direct YouTube link is here, and it'll likely be available via Winston's Facebook page, as well.
The tentative set list will include selections from Winston's two tribute albums — Linus and Lucy: The Music of Vince Guaraldi, and Love Will Come: The Music of Vince Guaraldi, Volume 2 — along with a preview of material from his upcoming album, Count the Ways: The Music of Vince Guaraldi, Volume 3. Following the pattern of those albums, many of the selections will be medleys, with two or three Guaraldi themes weaving in and around each other. One tune, "The Masked Marvel," will be performed in the style of famed New Orleans rhythm and blues keyboardist James Booker, another of Winston's musical inspirations.
Set your reminders!
Posted by Derrick Bang at 7:33 AM

Love seeing and hearing George, albeit virtually. But we just have to know, what is that beautiful cat's name?

George tells me that cat's name is Goobajie.