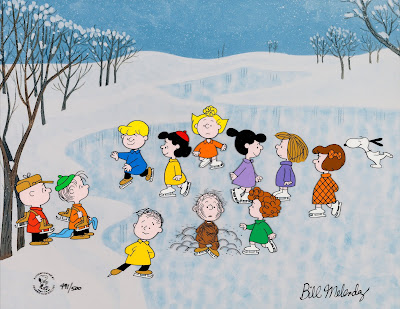 You’d think, after slightly more than three decades, that somebody would have noticed and discussed this by now.

But no; it appears to be a recent discovery, brought to my attention by David, a good friend and fellow Guaraldi fan.

Readers of this blog — and probably a good percentage of people throughout the world — undoubtedly know the lyrics of “Christmas Time Is Here” by heart. Goodness, we’ve watched A Charlie Brown Christmas countless times, and played the soundtrack album even more than that.

So we all remember that the show opens with the Peanuts gang ice skating and crooning the tune (actually “ghosted” by young members of the St. Paul’s church choir, from San Rafael, California: a group that included David). It’s a joyous scene, and — following the “Sleigh bells in the air” bridge — this is what we next hear:

A quarter-century passed, before the song was covered by another artist: Patti Austin, on the 1989 compilation album, Happy Anniversary, Charlie Brown! 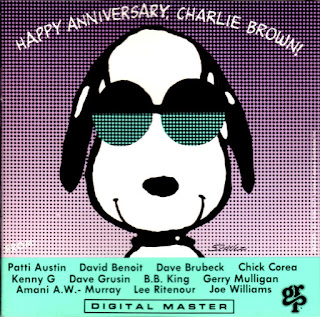 Following the “Sleigh bells” bridge, this is what she sings:

We’ll be drawing near …

Take a moment. Let it sink in.

Perform an Internet search on the lyricss to “Christmas Time Is Here,” and most results — but not all — show “We’ll be drawing near.” That’s likely due to the way the song is printed — complete with sheet music — on pages 93-95 in Lee Mendelson’s 2000 book, A Charlie Brown Christmas: The Making of a Tradition. Because why would anybody assume that Mendelson’s book might be incorrect? After all, he penned the lyrics, back in the day.

“We couldn’t find anybody to write the lyrics,” Mendelson recalled, in a 2008 interview for TV Time Machine. “I called all my Hollywood friends who were songwriters. But nobody took the assignment, so I sat down, and in about 10 minutes wrote the words to ‘Christmas Time Is Here’ on an envelope.

“I sure wish I still had that envelope!” 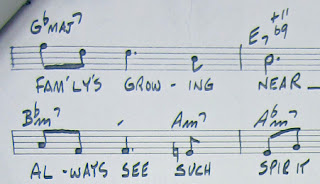 Well, we may not have the envelope, but we have something almost as good: the song’s copyright deposit, filed with the U.S. Library of Congress on February 7, 1966. You can see the relevant bit at the top of the second page, shown at left:

Did Lee change his mind, at some point between 1965 and 2000? Did he mis-remember? Did he hear and prefer Patti Austin’s slight modification?

(I sure wish I’d learned about this sooner, because he’s no longer around to ask. More’s the pity.)

Much as I prefer the original television and soundtrack version, there’s a certain logic to the shift; not everybody is part of — or near — a family during the holidays, so the less specific “We’ll be” can be considered more inclusive.

But now it gets fun. What did other singers do?

As ubiquitous as the song has become during the past few decades, that didn’t happen right away. Mel Tormé was next, on his 1992 album Christmas Songs; he chose “Fam-lies.” But then Rosemary Clooney (1994’s A Concord Jazz Christmas), John Pizzarelli (1996’s Let’s Share Christmas), Michael Franks (on David Benoit’s 1996 album, Remembering Christmas) and Melissa Manchester (1997’s Joy) all sang “We’ll be.”

Diana Krall, apparently an outlier on her 1998 EP, Have Yourself a Merry Little Christmas, went with “Fam-lies growing near…”

From then on, covers of this Guaraldi/Mendelson tune blossomed exponentially. The following list is far from definitive, but it’s a reasonable cross-section that suggests “We’ll be” is the favored choice. (F = “Fam-lies,” W = “We’ll be.”)

• Sarah McLachlan, Wintersong (2006) – Neither! She skips that verse entirely. But a decade later, when she sang the song on the 2015 TV special celebrating the 50th anniversary of A Charlie Brown Christmas, she went with “Fam-lies.”

I'm sure I haven't heard all of the covers of the song, but I don't recall any version that tracks the '66 Copyright verb "growing."

See above ... both Diana Krall and Sam Sparro employ "growing." So, based on the copyright deposit, I guess they aren't outliers after all; they're the only two here who sing the truly correct words!

What I find equally interesting is that the lead sheet is notated in the key of G-flat . . . a half-step higher than the key of F in which Guaraldi performed it and in which it is published.

I just paid close attention to the ACBC album version, and I'm maybe 70% sure the kids are singing "fam'ly's growing". The voices are buried a bit in the mix, but on the second go-round the initial consonant on the second word sounds slightly more like G than D, and the first vowel sound leans slightly toward O instead of AW.

I worked at radio station from '97-'04 that had a strong reputation as THE Christmas music station in the city (long before the "all Christmas" fad happened), and I know we played the Austin, Loggins, Chicago and Braxton versions (and maybe Mathis too), and I remember being puzzled be the "we'll be" variants, since that's clearly not what's being sung on the original. I may have even brought it up on the old Peanuts USENET group back then. Really weird.

Older Post Home
Subscribe to: Post Comments (Atom)
Visit my Guaraldi web pages to learn more about his discography, his work on the Peanuts TV specials and more.
Visit McFarland's web site to order copies of my book Vince Guaraldi at the Piano.