Will the preferred soundtrack please stand up?

I field a lot of questions regarding Guaraldi, more so now, in the wake of my book's arrival in the spring of 2012. I enjoy the correspondence, particularly when somebody points me in the direction of some previously unknown detail about the jazz pianist's life, or confirms an anecdote or concert date that I suspected was genuine, but hadn't yet verified.

Folks love to discuss his music as well, and particularly his score for 1965's debut Peanuts TV special, A Charlie Brown Christmas. 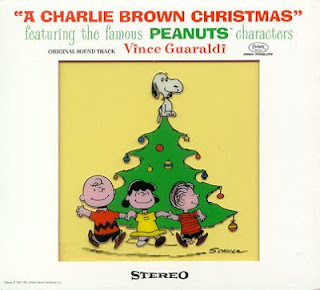 The most common question these days actually is a request: Numerous fans want to know how to distinguish the "original" 2006 Concord/Fantasy CD from the later "corrected" version. If you're not familiar with the controversy that erupted when this re-mastered album debuted, the exhaustive details can be found here. The pertinent modifications on the initial 2006 release concerned four tracks, and this is how Fantasy described them:


Track 1: "O Tannenbaum" -- the original LP version cut off the introduction to the song, which has been reinstated on this new CD;

Track 4: "Linus And Lucy" -- the original LP version was an edit of two different takes, whereas in the remix for the new CD we ran one of the takes in its entirety;

Track 5: "Christmas Time Is Here" (instrumental) -- the original LP version fades out at the end of the song, almost losing the last chord, which can be heard quite clearly on this new CD;

Track 7: "Skating" -- the original LP version fades during the bass solo at the very end, whereas this remastered CD allows the song to run to its conclusion, which adds about 10 seconds to the track.

Unfortunately, longtime listeners were very unhappy with these changes, insisting that they wanted the listening experience to be just as it was on the 1965 LP (although apparently it was all right to clean up extraneous studio noise). One must not tamper with perfection, folks insisted, and the situation was worsened by the fact that an entirely different take accidentally had been selected for Track 9, "Christmas Is Coming."

The other side of the debate was occupied by jazz fans who hunger for just the sort of alternate takes that this 2006 album provided. (Four bonus tracks offered yet more variety.) I belonged in their company, and I honestly couldn't understand the fuss; it wasn't as if all the LPs and 1988 CDs had vanished — or ever would — leaving people with no choice but the 2006 album. People who preferred the original listening experience still could find it, and quite easily.

But Concord/Fantasy bowed to public pressure and agreed to switch things back on all future pressings of the 2006 CD. Additionally, patrons unhappy with their "defective" 2006 originals were encouraged to send 'em back for this "corrected" version; the offer was valid through March 1, 2007 (so don't expect anything at this late date).

Well, you can imagine what happened next.

Intrigued by the controversy, some folks wanted the original 2006 disc; others wanted its replacement. Some wanted both. The problem: There was no way to tell 'em apart from the outside. One had to play a disc in order to identify it. (Queue up "Linus and Lucy" and listen for drums — or the lack thereof — in the opening measures.) That's not too helpful, unless one had access to a store that carried used CDs and equipment on which to test-play them.

Flash-forward to the present day, and there's still no way to tell 'em apart. The exterior packaging is virtually identical; heck, even the discs themselves are identical. No distinguishing codes along the edges; no indication of "second printing" or words to that effect. And so I'm asked this question a lot, and until now I've not been able to share any useful information.

Thanks to the diligent help of an equally obsessed friend, however, I now can offer a partial ray of sunshine. 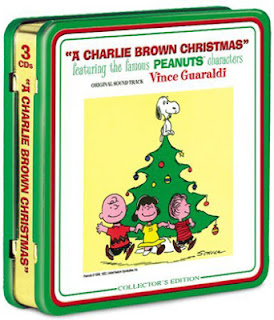 There's still no way to distinguish individually sealed versions of 2006 Mark 1 and Mark 2. But the 2007 holiday season debuted an attractively designed tin that contained three CDs: 1998's Charlie Brown's Holiday Hits; the 2005 compilation album, 40 Years: A Charlie Brown Christmas; and the 2006 re-mastered version of A Charlie Brown Christmas ... and the latter is the second, "corrected" version. Best of all, it can be identified by three distinguishing features:

1) The package was distributed and marketed by Madacy Entertainment, of Quebec, Canada, and each disc's exterior artwork also includes this information on the back cover;

2) The Madacy disk comes in plastic clamshell packaging, as opposed to Fantasy's paper tri-fold with the clear "cel" window; and

3) For some odd reason, the word "stereo" was left off the cover of this set's version of the 2006 Charlie Brown Christmas. And that's easy to spot.

So: Although I still can't help anybody wishing a guaranteed copy of 2006 Mark 1, folks wanting Mark 2 are encouraged to seek this tin set ... which has the added bonus of a heavily discounted price.

That's half the battle, anyway...

Speaking of minor controversies, it has long been known that while Coca-Cola sponsored the initial 1965 broadcast of A Charlie Brown Christmas, the soft drink titan's involvement was stripped away in later years, when CBS sold commercial spots to all sorts of advertisers. The TV special's opening scene, with Charlie Brown and the rest of the Peanuts gang skating to the gentle refrain of "Christmas Time Is Here," was similarly truncated when the show was released on video; the cute plug for Coke, as Snoopy slammed Linus and his blanket into a convenient sign, was removed. A second acknowledgment, at the special's conclusion ("Merry Christmas from the people who bottle Coca-Cola"), also was excised.

All these years later, whether on VHS, DVD, Blu-ray or anything else, the show never has been completely intact. As a result, the Coca-Cola sponsorship has assumed the aura of legend, with an equal number of people arguing that Coke never did have a visible presence in A Charlie Brown Christmas ... despite the premature — and quite obvious — fade to black and muting of the soundtrack immediately after the show's title appeared on screen. 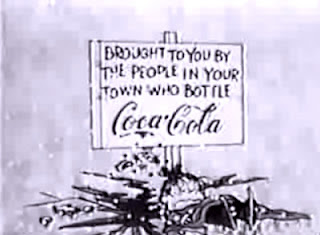 I've long known that the Paley Center for Media, with branches in Los Angeles and New York, has a copy in its archives; visitors can visit and view the show, but the Paley Center absolutely does not make copies. I assume that their copy is the original, wholly intact version ... but as I've not yet been able to make the trip and see for myself, I cannot state this with certainty.

Happily, I no longer need to. A helpful soul has posted definitive proof on YouTube: both the key seconds immediately following the show's title and the holiday greeting, complete with Coca-Cola logo, at the end.

But every answer comes with a price: While this footage resurrects the long-discarded proof of Coca-Cola's participation, sharp-eared Guaraldi fans will realize that the background song — "Christmas Time Is Here" — in the opening scene concludes with a refrain quite different from the version used for the 1965 album!

So where in Fantasy's vault is that take hiding?

It simply never ends...
Posted by Derrick Bang at 4:04 PM

Another greatly informative post! Like you, I'm grateful to have all of the variant performances that the 2006 release made available (both intentionally and inadvertently). As stated in my comments to a prior post, I also think that the 2006 remix boasts a definite sonic edge, even over the 2012 remaster.

But I'm *particularly* tantalized by the implications of the musical background to the "Coca-Cola" spot in the original opening of "A Charlie Brown Christmas" that you've highlighted.

First of all, you're right that the extended "Christmasti-i-i-ime" at the end doesn't appear in any of the commercially released performances of "Christmas Time is Here" (on the 1965/1986/2012 releases or the 2006 remix). The film/audio fades too quickly at the end for me to be certain, but it is *possible* that the second vocal repeat of "Christmastime" as it's fading is just a tape splice repeat of the first. But even just that single word points to a still-unreleased performance of that song.

While this may be old news to some of my fellow Guaraldi aficionados, even after making allowances for the poor, monophonic audio quality, my close listenings and digital scrutiny of the soundtrack led to a new-to-me realization: Even without the extended "Christmasti-i-ime" at the end of the original broadcast version, the performance of "Christmas Time is Here" playing during the opening skating montage of "A Charlie Brown Christmas" is *a different performance* than the one included on the soundtrack album! So there's already an alternate performance -- the one actually used in the show -- lurking (hopefully) on some tape somewhere! (To discern the difference, don't focus on the vocal performance of the children's choir, but on Guaraldi's trills and shadings in the background -- the sort of "call and response" notes that he plays after they sing a line of the lyrics. They're decidedly different in the TV and album performances.)

All I've got to say is: If they want this fan to happily buy yet a fourth copy of the "Charlie Brown Christmas" album, they'd better offer up some good bonus tracks of alternate performances for the 50th anniversary release in 2015!

Thanks again, Derrick, for your great book and this cool blog.

Hey Fantasy, how about just clearing the vaults for the 50th and putting out a box set with all the versions, instead of the last 20 years on mix and match?

Is the matrix number on the withdrawn version 1 re-mastered CD different to the one on version 2, I wonder?

Version 2 reads DIDX 134777 2 with a tiny 014 further round the inner ring on the playing side of the disc. I have another album on CD where a track was badly pressed and the later version sports a completely different matrix number on the inner ring.

It's worth checking, if you haven't already :)

Actually, I have; I exchanged several notes regarding matrix numbers with another fan, awhile back, and investigataed at the time. My uncorrected (version 1) CD matrix number is 65389AM-02 FCD-30066-2 082506-10. The format is completely different from yours, suggesting different pressing plants (which makes sense, as I'm in the States, and you're across the pond). Other correspondents discussing this issue via Steve Hoffman Forums contributed three data points:

So: In theory, it seems safe to say that if you could knowingly obtain a disc with either of the first two matrix numbers, you'd have an uncorrected version 1. Trouble is, one has to get inside the shrinkwrap, in order to see the matrix number; unless you're in a used music store, with unwrapped merchandise, that might be difficult. (Nor would I necessarily trust an eBay seller to have the wherewithal to find and accurately report on the matrix number.) And if you're in a used music store, you likely have access to a player, in order to sample the disc quality ... at which point, it's much easier and faster to simply queue up track 4 ("Linus and Lucy"), and listen for drums -- or the lack thereof -- in the opening measures (piano only = uncorrected; piano + brushes = corrected).

None of which, ultimately, helps one determine which version you're holding, from the OUTSIDE of a still-shrinkwrapped disc...